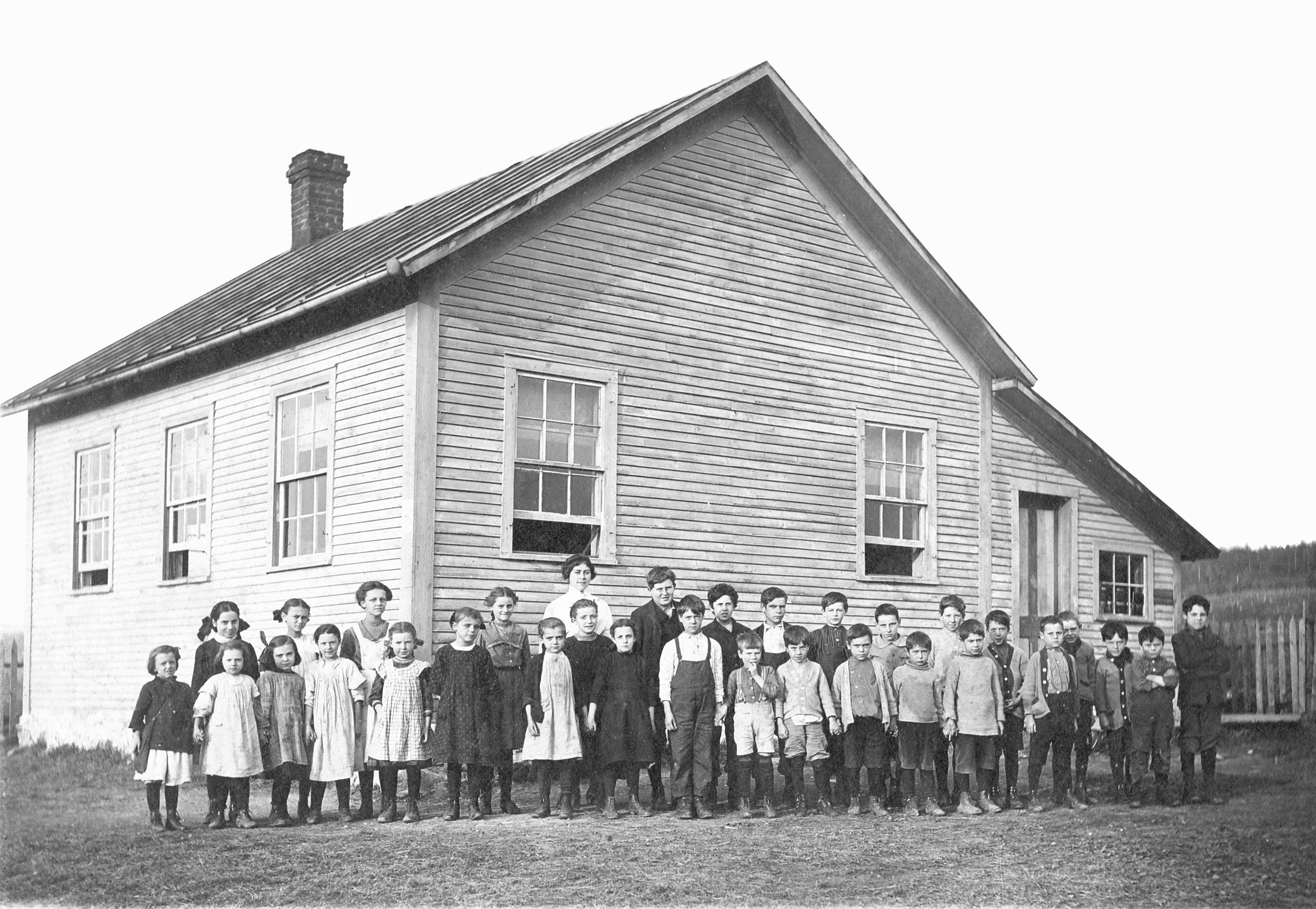 Several country schools eventually joined the “little red schoolhouse” in the decades following 1830.  There were seven in 1857, eleven in 1879 and sixteen in 1931.[1] Usually, they had the same characteristics. Constructed in wood, these schools had one classroom and sometimes lodging for the teacher. The classroom contained the teacher’s desk located on a platform, a blackboard and conspicuous religious symbols.[2]

SThe school offered only an elementary education. Children, therefore, learned mainly the basics. That was the case, for example, of the pupils of Elaine Philbrick McKelvey (1920-2010), the teacher at Brown School (Magog County) at the beginning of the 1940s. Among other exercises, she would have her pupils read the Sherbrooke Daily Record in order to improve their ability to read. [3] Students could also study arithmetic, history, geography, religion, the proprieties, drawing and singing.[4]

In country schools, education was very often provided by women. Moreover, the work of a teacher was often difficult and unrewarding. For a meagre salary, and in addition to teaching duties, “[the teacher]was responsible for maintenance, such as wood-stove heating, cleaning the building and snow-clearing. She also had to draw water from a well for her own needs as well as those of students.”[5]

The country schools were gradually closed and definitively abandoned when the Québec Ministry of Education was created in 1964.

Composed sometime after 1931 by John Owen Donigan, a resident of Magog, the poem Schoolmates recalls with nostalgia the Ives Country School (County of Magog) which the poet attended during the 1870s.

Today I look upon the scene
Around where stood our district school,
The maples, they are just as green,
Their shade alluring and as cool.

The Red schoolhouse, I see it not,
The walls have fallen by decay,
The grass is green upon the spot
Where oft’ we romped at play.

While standing there in single thought,
The days return, when we
Our childish battles fought,
Beneath this same old tree.

You, boys and girls who gathered here,
With books and dinner pail, each day
Strong, full of life without a fear
Lest you might go astray.

I know that some have passed beyond
The turmoil of all earthly strife,
Of them my recollections fond,
Shall last as long as life.

To they, whose lot is not to roam
On wooded hills or to the plains,
To blaze a trail and make a home,
To sow and reap the golden grain.

Had you and I Forseen that day
What time alone, alas now gone,
Impart to us along the way
What might have been if we had known.

The die is cast, the years have gone,
We cannot live ours lives again
But trust that hope witch led us on
To seek our goal was not in vain.

Hope, He gave us to sustain,
Lead us that we might not stray,
Help us worthy aims attain,
Ere we reach the final day. [6]

3. “The Little Red Schoolhouse”: The First Real School 5. The Magog Academy and the Municipalisation of Education