Coal Creek Mine Disaster May 22, 1902. Trains were used to remove the bodies of 128 miners killed to Fernie, BC for burial. Twenty-eight of the deceased were Italian.

A hand-written note on a photo states: “Lacking Enough Hearses or Wagons, Most Bodies Were Borne for Burial.” The 1902 Coal Creek mine explosion killed 128 miners. There was not enough wood at hand for coffins.

While the coal stocks of southeastern BC and Alberta were among the richest in Canada, the region’s mines were also among the most dangerous. A spark could ignite methane gas or coal dust; gas accumulation was particularly serious in the sloping passages and rooms of mountain mines.

Of the 128 killed in the Coal Creek mine disaster of May 22, 1902, 28 were Italian with the following surnames: Altobello, Angelo, Barbiere, Camarra, Chioda, Chuigara, Vivitarese, Federico, Flora, Fuoco, Matago, Matteo, Mazzei, Petero, Rosario, Senegala, Silla, Silla, Strangino, Tabbi, and Velgi. Of the 189 killed at Hillcrest, 28 were Italian. 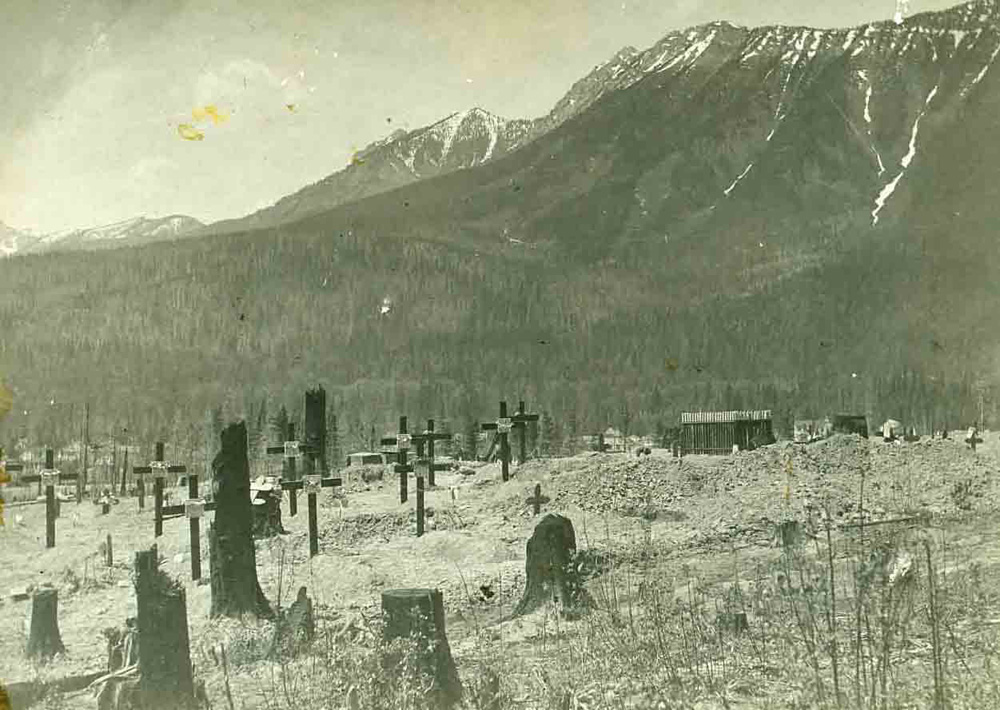 Crosses on graves in St. Margaret’s Cemetery, Fernie, BC marking the graves of miners killed in the 1902 Coal Creek mine explosion. Twenty-eight of the 128 men killed were Italian. 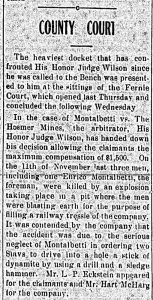 In Montalbetti vs. Hosmer Mines the company accused Enrico Montalbetti of negligence in ordering two “Slavs” to drive a stick of dynamite into a hole with a sledgehammer. Judge Wilson found for the complainants ordering maximum compensation of $1,500.

Authorities were quick to assign blame; the Fernie Free Press reported that the 1902 Coal Creek accident was caused by foreign workers and quoted a report stating that coal dust caused the explosion. The report recommended that workmen who could not read English or obey orders in English be excluded from mine work. The District Ledger of March 19, 1905, described the funeral of Salvatore Gattone who was crushed between coal cars while working at the Coal Creek Mine — he had been in the country for 10 months.

It is not surprising that miners developed fraternal societies to provide assistance in time of need – the Ordine Indipendente Fior d’Italia (Independent Order Flower of Italy).

The Ordine Indipendente Fior d’Italia  — Independent Order Flower of Italy — was a fraternal society founded by local miners to provide assistance  in times of need.

Audio clip with transcript: “Louis Sclippa Oral History | Bumps in the Mine (00:46)”

Audio clip with transcript: “Betty and Angelo Schianni | Accidents in the Coal Mines (01:35)”