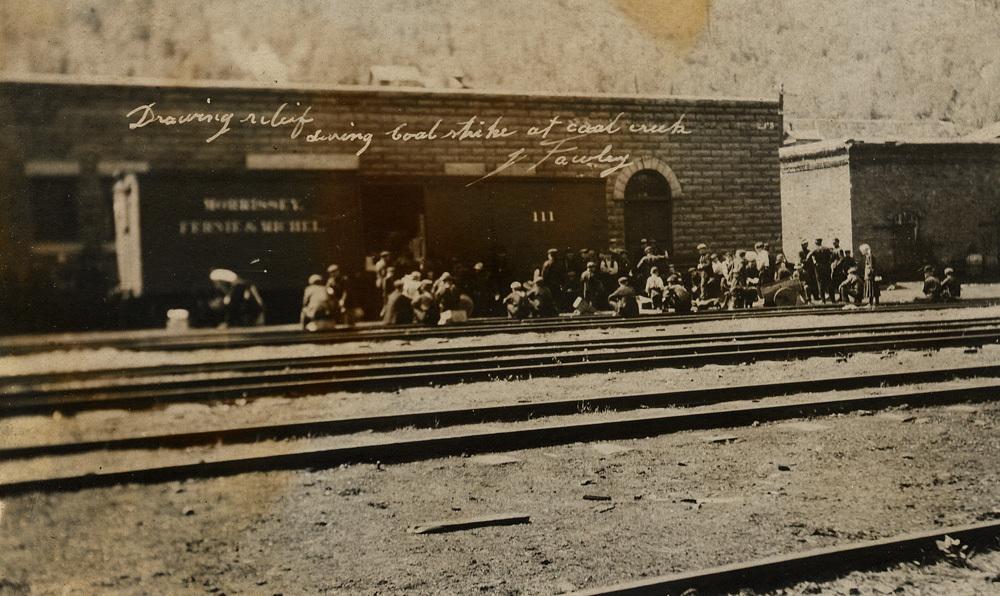 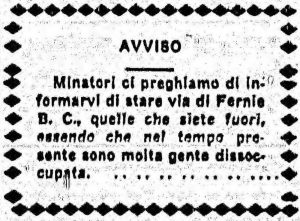 A notice (aviso) in the District Ledger of March 12, 1908 notes in Italian: “Miners we are informing you kindly to stay away from Fernie, BC, those of you who are away, because at present there are many unemployed.“

Strike or industrial action was used by miners from the earliest days of the coal industry in western Canada to further claims for fair wages, mine safety, and good working conditions.

The establishment of District 18, United Mine Worker of America, representing miners in southeastern BC and southern Alberta, gave strikers more power. In 1903, Fernie police intervened to stop strikers from harassing non-unionized workers, scabs, hired by the company to break the strike. In addition, companies could fire anyone who promoted unionization. A second strike, beginning September 22, 1906, lasted almost two months. The third and longest in Coal Creek and Michel in 1911, lasted eight months and involved 6,000 men. The results were not positive; men returned to work with less money in their pay packets. 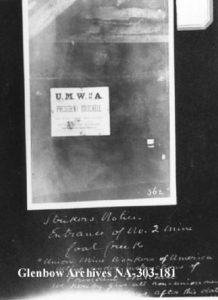 Strikers’ notice of United Mine Workers of America at the entrance to the No. 2 mine, Coal Creek mines, Fernie, BC, ca 1906.

It was the 1906 strike involving the Galt and Ashcroft Collieries in Lethbridge that brought regional issues into the national arena. Fears of a coal shortage prompted the federal government to intervene. In 1907, the government passed the Industrial Disputes Investigation Act designating coal mining and railways as public utilities and enforcing mandatory conciliation.

In June 1915, miners in Fernie demanded that single and married co-workers with families in Eastern Europe be interned at the recently-opened Morrissey Camp. While the Italian government had sided with the Allies (the Fernie Free Press printed the names of Italian reservists who were eligible to join their units in the European war), there was still distrust levelled at Italian and Eastern European miners.

When Coal Was King Unions