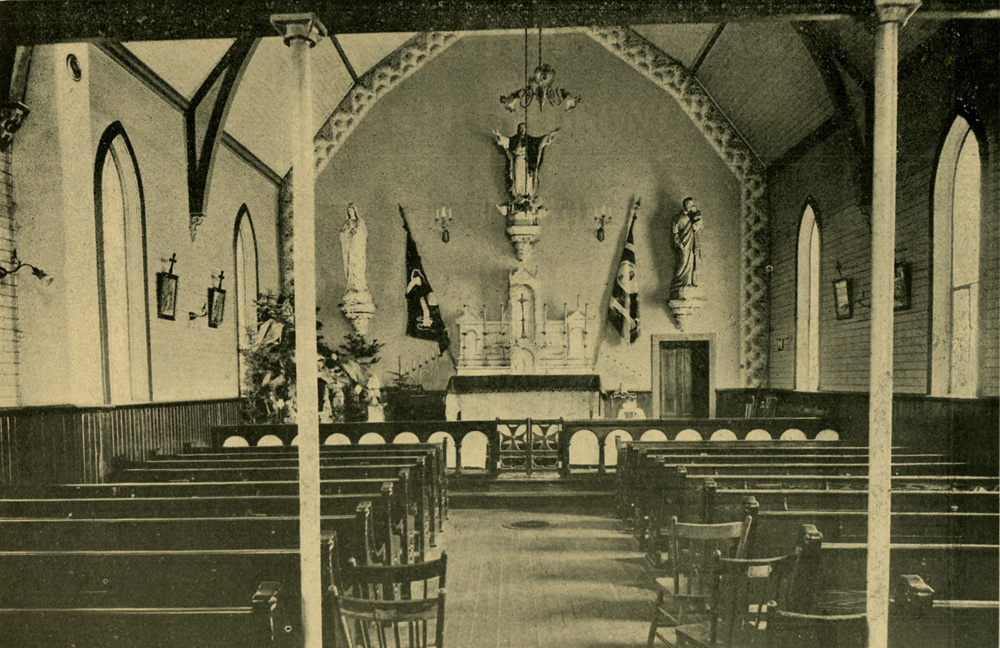 The interior of the First Holy Family Church, Fernie, BC, built in 1898. 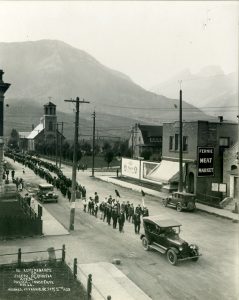 The procession for the funeral of Joseph De Georgia, age 52 and Casola Innocente, age 42, September 2, 1928. The hearse holding the body was followed by the Italian fraternal society and mourners.

Establishment of a Roman Catholic Church in Fernie resulted from the arrival of French missionary Oblates of Mary Immaculate, who came to evangelize the Ktunaxa Nation. Oblate priest Father J. Welch established Holy Family Church In 1898. The original frame church burned down in the 1908 Great Fire and was replaced by an impressive brick building.

Father Nicholas Coccola, an Oblate missionary who arrived at the St. Mary Mission near Kamloops in 1880 to minister to Indigenous People, became the resident priest in 1904 when Father Welch moved to Vancouver. Members of Fernie’s Italian community were familiar with Father Coccola since he had also served Italians in railway construction. Italians made up about one-third of the congregation.

Descendants of Philip Carosella believe that he supplied furniture and fixtures for construction of the new church; the Rizzuto family supplied building materials; and community members provided free labour. While a number of ethnic groups donated stained glass windows, there is no memorial plaque noting Italian contributions. Whether this was intentional or not cannot be established. 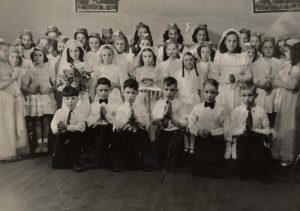 A tradition of holding confessions in various languages including French, German, Croatian and Italian existed. The Italian presence is found in records of marriages, births, and deaths. All involved community gatherings. Baptisms were reasons for great celebrations and some went so far as to organize banquets at a hotel. Funerals were also conducted with pomp and circumstance — a feathered hearse carrying the body would be followed in procession by the Italian Band, fraternal society members, and mourners.

Marriage Registration of Alexander and Maria Rizzuto, July 13, 1902. The witnesses were Antonio Carosella and Michele Guzzi.