Why did people without land title set in Roc-d’Or where there was no sewer system or running water? Especially since comfortable, well organized, towns built by the mining companies existed nearby?

The view North from the south end of Roc-d’Or in 1937 (BAnQ Rouyn-Noranda, Canadian National fonds).

Living in the mining village was a privilege. Employees and a few merchants and professionals had precedence. Many newcomers to the Fournière Township had no other choice but to settle in Roc-d’Or. 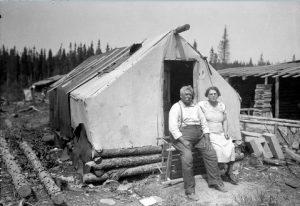 In the company villages, mine workers could live in dormitories. But women and children were not allowed into these lodgings. Many of Roc-d´Or’s inhabitants were  miners who wanted to live with their families.

Some settled in Roc-d´Or to sidestep their employer’s control or to pay less taxes. The price of a lot in a company town was often too expensive as there was no guarantee of long-term prosperity in the region. Squatting was seen as an advantageous solution.