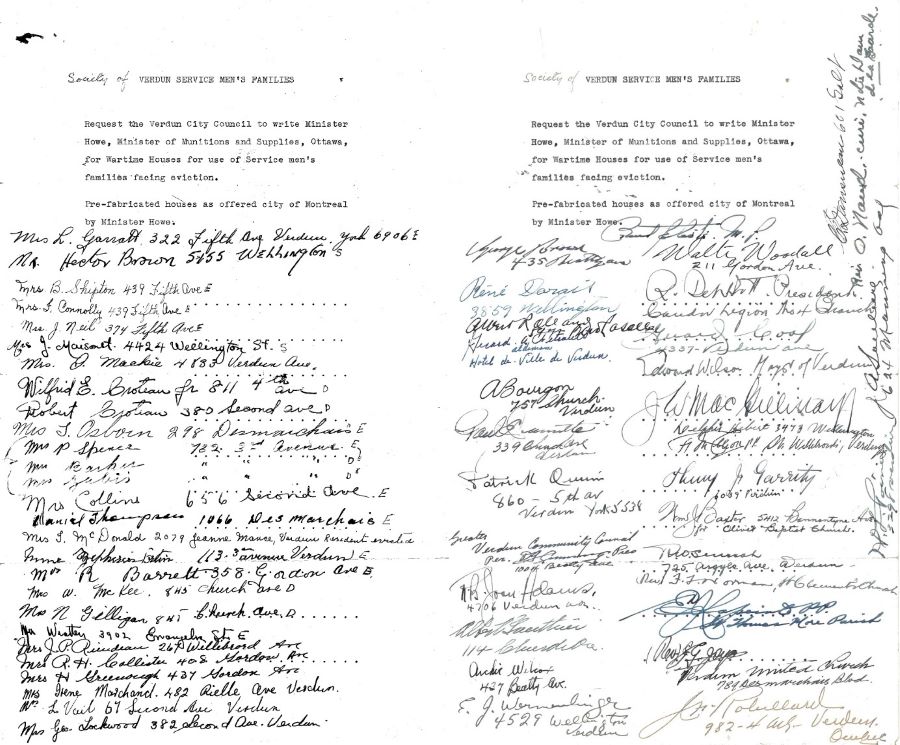 Verdun Branch no. 4 of the Canadian Legion identified the housing crisis as the main source of discontent among servicemen. This reproduction of a petition submitted by veterans to the Minister of Munitions and Supply demanding the construction of houses is illustrative of the situation. In Canada, 60% of people targeted by eviction during the 1945–46 housing crisis were servicemen.

The local Legion branch was the veterans’ greatest ally in their struggle against the landlord association Ligue des propriétaires de Verdun.  The branch sent delegations to City Hall, did mass mailings of letters and petitions to the federal government, reviewed all threats of eviction and demanded the immediate construction of new housing. It also promoted more militant action. On May 1, 1945, Robert DeWitt, president of Branch no.4, advised evicted families to refuse to leave their homes until the Branch could take action to help them.

In April 1945, the City signed a contract with Parkdale Homes Development Corporation to build 100 apartments on Egan Avenue, with the first 36 rentals being reserved for veterans or their families.

Transcription of the introductory text of the petition:
SOCIETY OF VERDUN SERVICE MEN’S FAMILIES

Request the Verdun City Council to write Minister Howe, Minister of Munitions and Supplies, Ottawa, for Wartime Houses for use of Service men’s families facing eviction.
Pre-fabricated houses as offered city of Montreal by Minister Howe.