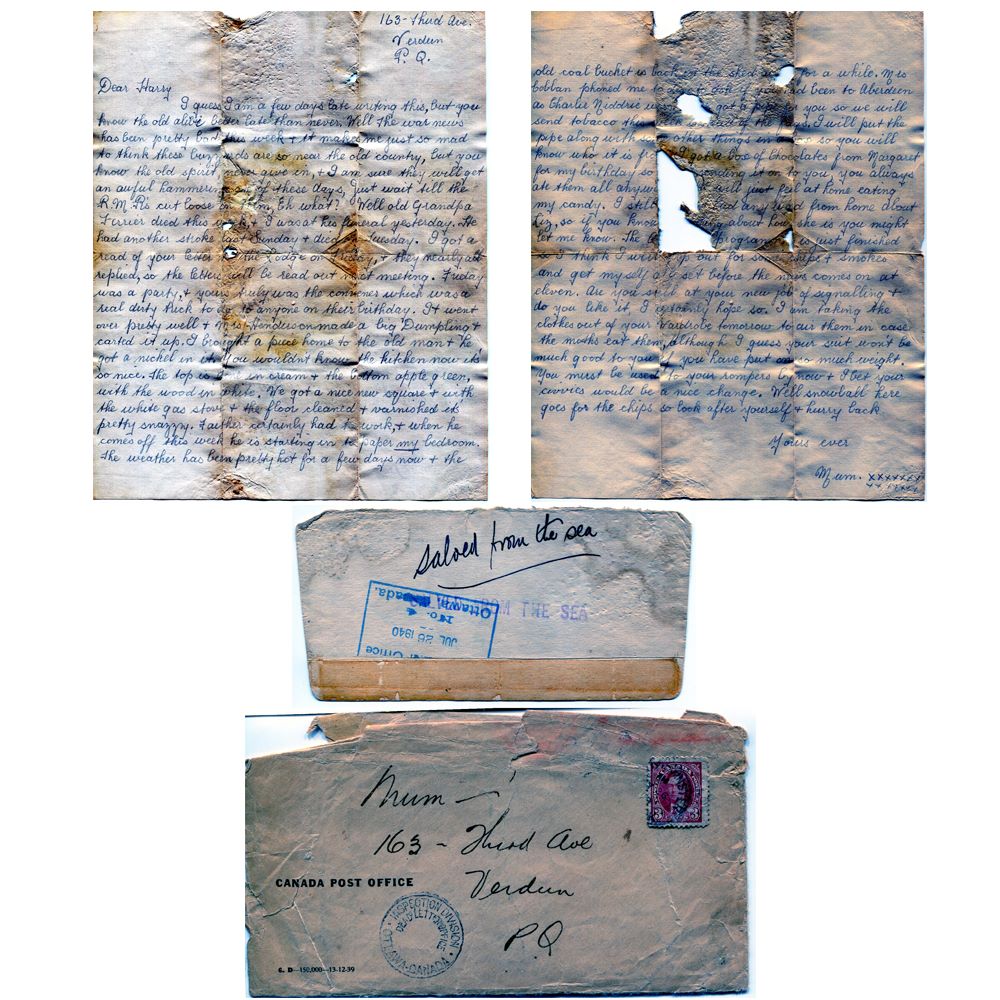 Here is a letter sent by Helen King D’All to her son, Harry King D’All, who was serving in England with the Royal Montreal Regiment. The letter was recovered from the sea after the ship transporting it was a torpedoed. It was returned to its sender thanks to the return address at the top of the letter. The back of the envelope is marked “Salved from the sea.”

Transcription of the letter

I guess I am a few days late writing this, but you know the old alibi better late than never. Well the war news has been pretty bad this week + it makes me just so mad to think these buzzards are so near the old country, but you know the old spirit, never give in, + I am sure they will get an awful hammering one of these day, just wait till the R.M.R.’s cut loose on them, eh what?

Well old grandpa Ferrier died this week + I was at his funeral yesterday. He had another stroke last Sunday + died this tuesday. I got a read of your letter in/at? the lodge on Friday, + they nearly all replied, so the letters will be read out next meeting.

Friday was a party, + yours truly was the […] which was a real dirty trick to do to anyone on their birthday. It went over pretty well + Mrs Henderson made a big dumpling + carted it up. I brought a piece home to the old man + he got a nickel in it. You wouldn’t know the kitchen now its so nice. The top is one ice cream+ the cotton apple green, with the wood in white. We got a nice new square + with the white gas stove + the floor cleaned + varnished its pretty snazzy. Father certainly had to work + when he comes off this week he is starting in to paper my bedroom. The weather has been pretty hot for a few days now + the…

…old coal bucket is back in the shed […] for a while. Mrs. Cobban […] phoned me to […] if you had been to Aberdeen as Charlie Niddrie was […] . […] got a pipe for you so we will send tobacco this week instead of the fags. I will put the pipe along with some other things in a box so you will know who it is from. I got a box of chocolates from Margaret for my birthday so […] sending it on to you, you always ate them all anyways […] will just feel at home eating my candy. I still […] and any was from home about Liz, so if you know anything about how she is you might let me know.

The […] program is just finished so I think I will go out for some chips + smokes and get myself all set before the news comes on at eleven. Are you still at your new job of signalling + do you like it, I certainly hope so. I am taking the clothes out of your wardrobe tomorrow to air them in case the moths eat them, although I guess your suit wont be much good for you if you have put on so much weight. You must be used to your rompers by now + I bet your civvies would be a nice change. Well snowball here goes for the chips so look after yourself + hurry back.