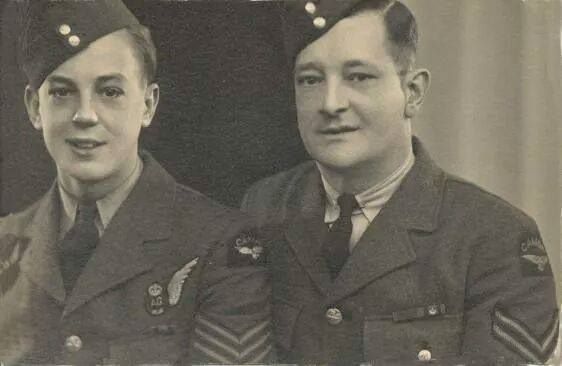 In 1943, Douglas Whyte enlisted in the Royal Canadian Air Force, following in the footsteps of his father.

Transcription:
D.W.: I belong to a group of about twelve fellows who were real friends.
S.D.: Twelve?
D.W.: Twelve. That we considered… I don’t like to use the expression gang, because I…
S.D.: But was it a gang?
D.W.: It was a gang, yeah, really. And out of the 12, 11 enlisted.
S.D.: No kidding.
D.W.: That’s right.
S.D.: But why is that, do you think? Is that peer pressure or uh…?
D.W.: No, I think most of the individuals, like myself, had military in their family. Like I mentioned, my dad was 20 years, at least, with the Victoria Rifles, and the uncle mentioned in the…
S.D.: The article
D.W.: The article… was a veteran of the South African Boer War and the First World War and then became a member of the Veterans Guard.
S.D.: Right, during the Second World War?
D.W.: Right, and he was stationed in Coteau-Landing. And of the eleven I mentioned, that eventually went into the service, I think all of us, in one way or another, belonged to the cadet corps. Myself, being in the Air Cadets. Three or four of my buddies were in the sea cadets, and we all sort of prided ourselves on being the military types.
[…]
S.D.: So, why did you enlist? Let’s talk about you now.
D.W.: Well, it was the thing to do. Let me put it out. I mean, I don’t want to appear the Patriotic Doug that just couldn’t wait to get in there and join up so I go over and knock those bloody jerries apart. I think there was a certain amount of influence, or the fact that my father was in the service. It had to do with the fact that I was an army brat, if you want to call it that.
S.D.: Yes
D.W.: Because my dad was in the Victoria Rifles for twenty years, and as I said I was considered the Vic’s mascot because I spent so much time at the Chomedey Armoury. And then when they officially moved to their new quarters on Cathcart, babysitting was not a problem for my mother, because my dad could take me all the time to the Vic’s. You know, I used to sit on the side while they did their parades and the whole thing. So, I guess all I had to do was… because I was anxious, I was anxious to get into the service. There is no doubt about that. I couldn’t wait and I did get a break by being in the cadets and being someone that knew the squad leader who could pull the strings and etcetera so…
S.D.: Because you were underage.
D.W.: Yeah.