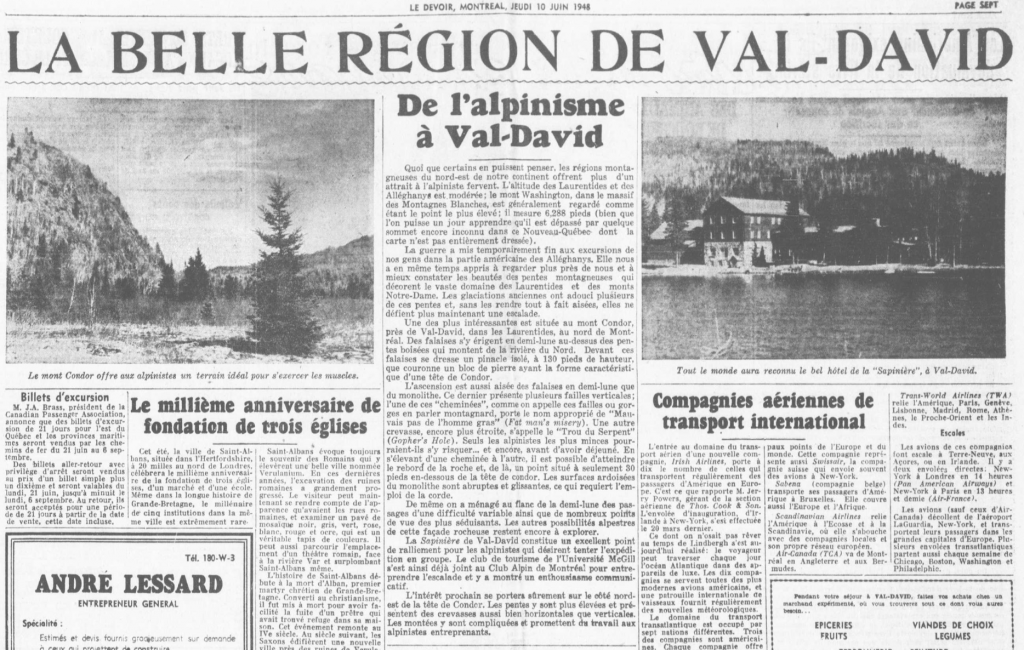 Although the end of the 1920s was in some ways a remarkable time, notably for the discovery of the first rock walls and the creation of ski trails, it was nevertheless a time of considerable hardship in Val-David. The economic crisis struck the village hard, with 40% of the population falling into the category of the needy. The agricultural land paid few dividends and the landscape was being increasingly devastated by the forestry industry.

The shores of lake Paquin around 1930; most of the trees are gone

In the end, both agriculture and logging were discontinued. The land was divided into lots, which were put on sale and had cottages built on them (a number of farmers eventually became entrepreneurs). The forest was allowed to grow back. To the delight of newcomers, the tourists, nature took back control of the territory. In 1931, the first inn was built, called Villa Mon Repos. The Laubenstein boarding house (to become the Hôtel Mont-Condor) followed next, in 1932.

Léonidas Dufresne, Mayor of Val-David since its creation, took part in the effort to create jobs following the Depression. In 1932, in an entrepreneurial role, he created an artificial lake on his land. He then built La Sapinière on the banks of this lake, in 1935. It became one of Québec’s most prestigious hotels with an enviable reputation for its Québec and Canadian gastronomy. In 1936, the hotel had a bare 20 rooms, but by 1940 it had doubled to 40. It was advertised internationally and for over 75 years, the Dufresne family was closely associated to the development of outdoor sports in Val-David and the Laurentians.

Other inns and lodges were built, all offering recreational activities like rock climbing, skiing, swimming, canoeing and more. Development not only took place in the hotel field. In 1947, some 400 local houses were rented to tourists each summer. Some of the locals were willing to spend the summer in their barns or sheds in order to rent their home and benefit from the tourism boom. Val-David’s population was about 800, which doubled in winter and tripled in summer.

Tourism soon became the principal, if not the only, industry of the village.

Time to Democratize From a Farming and Forestry Community to the Capital of Rock Climbing!