After welcoming the first pioneers, Val-David began to play host to interested newcomers and professional climbers. These individuals were joined by local personalities with a variety of backgrounds: farmers turned entrepreneurs, organizers, trainers, filmmakers, writers, etc. 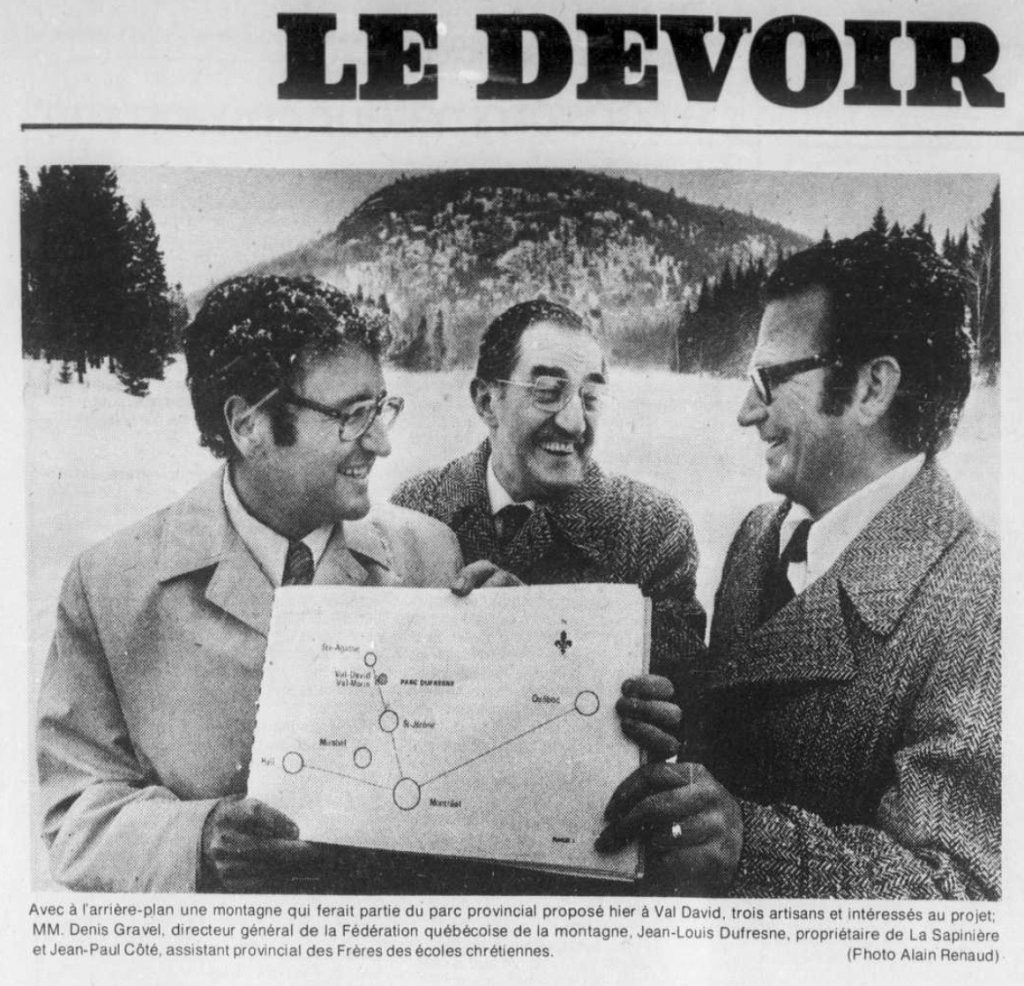 All these fine folk collaborated in the creation of a local, regional and provincial structure around rock climbing and other outdoor activities. At the same time, the arrival of climbing clubs and federations, as well as climbing schools, contributed greatly to the development of rock climbing. And let’s not discount the support from the tens of thousands of visitors who came to enjoy a stay in Val-David in order to climb. All during this time, the Dufresne family allowed the climbing community to enjoy its vast terrain free of charge.

A FIRST PROJECT THAT FAILS

The Regional Park we know today had to pass through a long series of trials and tribulations. In the 1970s, a significant portion of land in the middle of the village was devastated to provide gravel needed for the extension of Highway 15 up to Sainte-Agathe. The Québec and Canadian governments provided some financial compensation to the small municipality, allowing it to create the Dufresne Provincial Park with an area of some 1,200,000 square feet. From 1972 to 1975, a number of citizens worked hard to develop a project which was unfortunately destined to die in 1978. This was in spite of the sums allocated for land expropriation and the $2.8M promised by the two tiers of government. Sadly, the project was abandoned because the municipal council of the time refused to pay the salary for a park warden out of its own budget!

Six Canadian postage stamps illustrating some of the mammals to be found in the mountain country around Val-David.

OPENING OF A TOURIST RESORT

In 1992, a project submitted to the municipal councils of Val-David and Val-Morin was finally approved! The Val-David / Far Hills ​Ski Centre was born. With its 130 km of trails, it was the biggest Nordic ski centre in Québec and Canada. It could stand comparison with Europe! In summer, there was rock climbing, hiking, and the beginning of mountain biking; in winter, cross country skiing took over, with snowshoeing trails opened a bit later.

Six Canadian postage stamps illustrating some of the birdlife to be found in the mountain country around Val-David.

Then, in the summer of 1997, it was panic stations in Val-David! The Dufresne family had generously continued to make their land available for anyone to cross, but they now decided to sell both the land and the mountains, including Mont Condor, Mont Césaire and Mont King, the birthplace of rock climbing. A sum of $250,000 had to be found rapidly, so the Val-David community set to work. A committee was quickly formed to work out a strategy for raising the funds and safeguarding the territory. Fortunately, the Dufresne family accepted $100,000 in charitable tax receipts and the municipality put up a further $70,000. That left only $80,000 to complete the sum required. Pierre Lefebvre, owner of Auberge Le Rouet, put the amount he received from the sale of some of his own land into the kitty. The government of Québec put in another $50,000. A drawing was organized by the committee with the proceeds from the sale of tickets making up the final amount. In September 1997, the park became a reality! In following years, thanks to a vote by referendum, the population accepted to pay a special tax in order to purchase still more land and enlarge the park. Hundreds of volunteers took part in creating what was to become, firstly the Dufresne Park and later, the Val-David / Val-Morin Regional Park.

Map of the Val-David–Val-Morin Regional Park, 2019

In the Dufresne sector of the park, summertime means that rock climbing is THE number one sport. In fact, climbers begin to arrive early in spring, as soon as the trails are clear and the rock faces dry. Climbing can be enjoyed all through the season, right up until the first snows of late fall. And in winter? It is said that certain addicts actually do some ice climbing in hidden corners, but… shhhh!!!

The 1980s and 90s A Revolutionary Millennium