“It is an art centre of many parts, named after A.C., but without Barbara, we wouldn’t have it” —Grant MacEwan 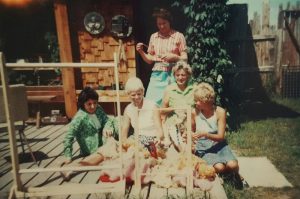 Soon Barbara was expanding again. She wanted to increase the gallery space in her home to exhibit more work by Alberta artists. In 1975 she recruited friends and sourced wooden beams from the Murray Mine in Drumheller, Alberta to build a conservatory. She filled the room with art and plants, including an evergreen oak brought from a friend in Texas. It was so beautiful she spent much of her time there, inviting guests for tea in this sanctuary. She’d successfully created an amazing art centre and her home had become a haven for artists, aspiring and well known alike, because to Barbara, everyone was an artist. 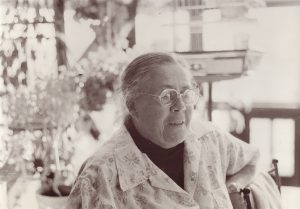 Barbara in the Green Room, circa 1980s

Essential to the development of the Centre as we know it today, Barbara started exhibiting the work of young Alberta artists in her home. Through the Leighton Foundation, she collected work by these artists, furthering their careers. She was motivated by her belief that most people feel uncomfortable in art galleries. She said, “they won’t stop and look at a painting and really see what kind of feeling they get from it. But they will in a house.” Her philosophy was that art shown in a private home is more attractive than in a formal gallery. That was because viewers had the ability to become intimate with it and to imagine the work in their own homes.

“There’s a cold, impersonal feeling to a gallery that makes art a dead thing.”—Barbara Leighton

Robert Ollerenshaw, friend of Barbara and later a Board Member of the Leighton Art Centre, described the comfortable and casual atmosphere in Barbara’s home and gallery. Whereas people would dress up when visiting art galleries in Calgary, the same people would come to her place in jeans. You would find some of Alberta’s most prominent artists at Barbara’s and feel at ease talking with them about art.

Barbara Builds a Home for Art (captions available in both French and English). View this video with an English transcript.

“As long as I have any input in this place, this is not going to be an institution”—Barbara Leighton