In 1933 A.C. established a summer art school, inviting around 20 of his most talented students to attend. Together they assembled at the Brewster’s Kananaskis Dude Ranch in Seebe, Alberta, where they sketched and painted the impressive landscape and mingled with the cowboys and dudes at the ranch. As always, A.C. had his students’ best interest at heart, so he and Barbara paid for Margaret Shelton’s tuition and room and board to attend the summer school in Seebe and later in Banff. He had faith in Margaret’s ability and did not want her to miss out because she was unable to afford the program. His confidence in her was accurate—she would go on to be a very successful artist. 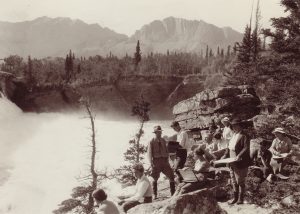 A.C. Leighton with students at Seebe summer school, circa 1933

A staunch academician in the English watercolour tradition, A.C.’s teaching method required that students perfected artistic technique. Still, he allowed them to find the medium, subject matter and style that would enable them to be most productive and effective. He never pushed his style onto students because A.C. believed that the individual artist’s perception was incredibly important. Every person will see the same object differently and as an artist, will treat the subject differently.

With suggestions and constructive criticisms, A.C.’s approach was always kind, guiding his students towards discovering their unique vision and approach. He never rushed or pressured students because he believed that a person’s individual artistic development occurred only after leaving school when they could use what had been learned to explore and practise.

A.C. relocated these classes from Seebe to Banff in 1935. In 1936 when they joined the Banff School of the Theatre to become the Banff School of Fine Arts (now the Banff Centre for Arts and Creativity), 50 students were enrolled. They came from as close as Calgary, and as far away as New York and New Jersey. 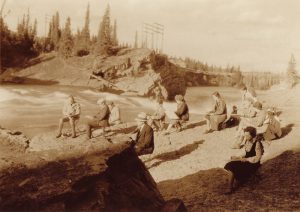 Students at Seebe summer school, circa 1933