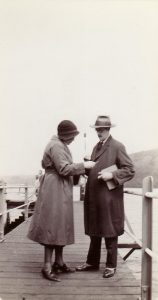 Friends give credit to Barbara for being a wife who truly supported her husband in all of his professional endeavours. She was responsible for cooking and keeping A.C. comfortable but she willingly and happily took to this task. They travelled the world together. From England to Scotland and Ireland, the west coast of British Columbia, Oregon and California, and ultimately to the Rocky Mountains, the Leightons pursued artistic inspiration and places to call home.

However, A.C. and Barbara never had children. Barbara’s niece, Mary Sherbino, recalls being terrified of A.C. when she and her sister were children. That was in contrast to A.C.’s younger years when children were drawn to him. Barbara recalls an earlier time while they were living in England when “children from miles around” would come to watch him paint. They “were always hanging around and climbing all over him.” One small child, Richard, would come knocking at the door and A.C. would draw whimsical pictures for the boy—lions eating strawberries and giraffes with crutches. Richard came over every morning to breakfast with the Leightons and spent much of his time with them. His father had been killed in the war and his mother was terminally ill. His older brothers had been put out for adoption and so A.C. and Barbara had hoped to adopt him. In the end, Richard’s grandfather decided that he couldn’t let him go and the Leightons were left childless.

When they returned to Canada in the early 1940s, A.C. and Barbara bought land in Chilliwack, British Columbia and hired a man and his family to work the farm. As it often did adventure found them and the man and his family disappeared overnight leaving Barbara and A.C. to work the farm for a time on their own. Once they sorted out that problem, they moved to Crescent Beach in today’s Surrey B.C. Eventually, longing for the mountains and the stimulating sunshine of Alberta, A.C. and Barbara moved back to Calgary and settled in Highland Park.

Rarely staying in one place for long, in 1952 to Leightons moved again to England, this time to find relief for the chronic health problems that had been plaguing A.C. since he was a young man. These problems would, unfortunately, cause a premature end to his life. This move, in 1952, was so sudden that Barbara had no choice but to leave the dishes in the sink, unwashed because A.C. needed to leave for England that very moment. But, enroute to London, their plane hit a snowstorm and had to make an emergency landing in Shannon, Ireland.

Eight months later, they were still living in Limerick with no immediate plans to leave. They had a flat in Limerick and a shepherd’s hut on top of an Irish mountain where A.C. could paint. When they returned to Calgary three years later, the dishes were still in the sink.

The House that Ace & Barbara Built (captions available in both French and English). View this video with an English transcript.

It was at this time, in 1955, that the Leightons decided to settle permanently in the Calgary area. A.C. Leighton wanted land with a view of the mountains because his health problems were making it more difficult to travel. They drove south of Calgary to see a piece of land, but it did not meet A.C.’s standards. On the drive back, the couple ran into a farmer and expressed their disappointment. He told them that he had a parcel of land in which they might be interested.

The property they inspected on that day had originally belonged to Mr. Thomas Jameson, who called the land “Ballyhamage Ranch” after a town in Ireland. Perched on a high hill, A.C. Leighton could see the entire stretch of the Rocky Mountains on the horizon; he decided to purchase the quarter section on the spot. Barbara pulled out the $100 of “mad money” she always kept for spontaneous situations, and A.C. wrote an I.O.U. on a sketchbook page for the remainder of the price.

Immediately, A.C. procured the lumber and recruited a group of local men. In one weekend, they worked together to build the shell of what is now the Studio Gallery. Over the years, they would further build on to the house, adding cross-sections, a tower and more until it became the building you see today. They kept the Irish name and called this new home Ballyhamage. This would become the Leighton Art Centre as it is today. 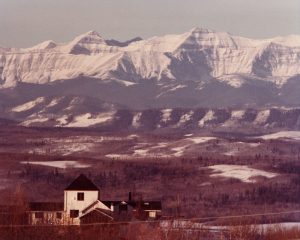 View of the Leightons’ final home—“Ballyhamage”, no date