“The grandeur of the scenery, the purity and beauty of the colouring being indescribable, there was no lack of subject, for one could be found at every angle.”—A.C. Leighton

His rise in England’s art community was just a beginning. Before long, A.C.’s work caught the attention of the Canadian Pacific Railway (CPR). He had been working as a commercial artist in London, building models and dioramas for various advertising campaigns. It was in 1924 when one of these projects sealed A.C.’s fate. His design of a working scale model of the Port of Liverpool seriously impressed representatives of the CPR. The company soon hired him to travel to Canada as one of their commercial artists. 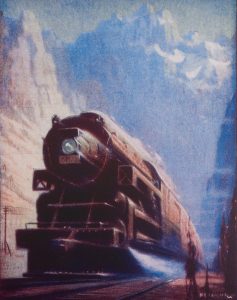 Steam locomotive in the Canadian Rockies, circa 1929

A.C. was hired to paint and design promotional materials intended to advertise travel, immigration and freight traffic to Canada. Compensated with passage across the Atlantic, A.C. arrived in Canada in August of 1925. To assist in his work, the CPR provided A.C. with railway passes and accommodation allowing him to travel extensively around our nation. As he made his way west, he painted scenes of Canadian cities and wild landscapes with the agreement that the CPR would have the first right to view and purchase his work. The CPR did acquire a number of his paintings, and subsequently used them for international advertising.

This first visit to Canada had a very significant impact on A.C. Even though it lasted only a few short months, A.C. quickly fell in love with the Canadian Rockies. He, like many others, was seriously impressed by the landscapes of Western Canada.

Over three trips to Canada with the CPR, Leighton painted dozens of landscapes. During one trip he was travelling by train when he saw a vista that he had to paint. So A.C., always making sacrifices for his trade, jumped from the train. He injured both hands in the fall but resilient as ever he sufficiently captured the view. He travelled the country from coast to coast, but the CPR life wasn’t for him. In 1929, Leighton resigned from the CPR to pursue another opportunity in Calgary, Alberta. 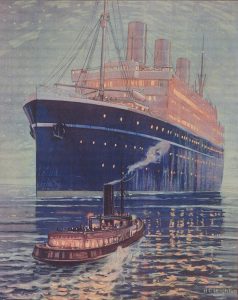 Canadian Pacific Empress of Scotland, circa 1930