“She was a tremendous teacher.”—Robert Black 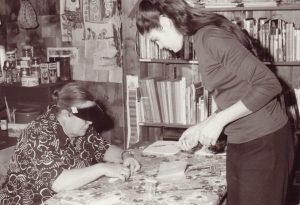 Barbara and a student, circa 1970s

Although Barbara Leighton was a skilled artist, her legacy rests mainly in her promotion of arts education in Alberta. She believed that everyone could be an artist because everyone has an inherent need to create. Because of that she encouraged everyone to develop their artistic skills through training and experimentation.

Her students became volunteers afterward teaching classes of their own. It became a community of artists supporting each other. With that communal support, Barbara’s art centre grew and became a social and professional centre of craftspeople and artists.

During all this growth, Barbara encouraged people to try new things. She encouraged students to get their hands dirty and to explore their materials. They should feel the consistency of the paint or the weight of the pencil. She did not believe that you could conceptualize an artwork effectively without having fully experienced the medium first. Like A.C., Barbara was an excellent teacher. She would provide valuable constructive criticism to an artist, breaking down the work to suggest what was working and what directions could be taken next. 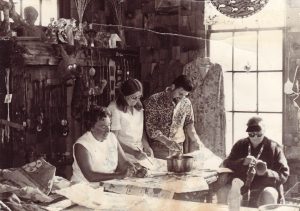 Barbara holding court in the schoolhouse, circa 1970s

“Barbara can usually be found at the schoolhouse, but that is reasonable because Barb is the Leighton Centre.”—Leighton Centre for Arts and Crafts Newsletter, May 1975

Even when she wasn’t teaching, Barbara held court in the little red Ballyhamage schoolhouse where the art and craft classes took place. She would observe the classes, inspect the knots on the tie die and ask children about their creative process. Never critical and never telling a young artist what to do, she would merely ask, “Now, tell me why you made it that way?” And if the student gave her an explanation of their creative thinking, Barbara would be satisfied. 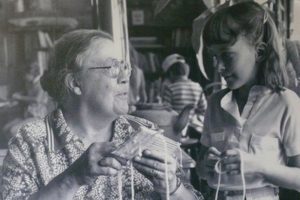 Barbara teaching a young girl to weave, circa 1970s

“Barb herself has managed to retain the wonderment of childhood…the excitement of discovery…the eagerness to experiment that most adults lost long ago…”—Linda Curtis in The Albertan, date unknown

Barbara strongly believed that the natural world is conducive to creativity and this is how she taught the students of the Leighton Centre. She encouraged the children to explore the land and to learn about the bugs, trees and flowers. The students learned how important all of this is to the world. She touched a countless number of children over the years. Today, you can ask most who grew up in the Calgary area about the Leighton Centre and they will remember a magical day spent exploring the countryside and making art.

“Barbara wanted to make art available to all people. Both young, both old, both skilled, both unskilled” —Margot Van Lindenberg 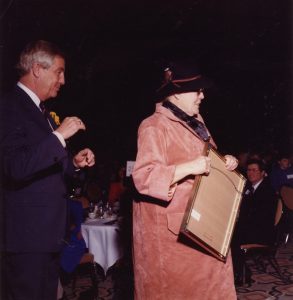 Barbara has been widely recognized for her support of the arts in Alberta. In 1980 the Government of Alberta awarded her contribution to Alberta’s heritage of pride. In 1984 Barbara won the Alberta Achievement Award for outstanding contribution to Arts & Crafts Development. Her honours continue years after her passing, In 2012, Barbara was named one of 100 Outstanding Albertans who were honoured during the Calgary Stampede’s Centennial for the contributions to our province. Most recently, her name and 29 others were included in the Wheel of Women installation in Calgary’s East Village.