“All the time, he never, at no time did he ever, was he ever, diverted from the fact he was painting.”— Barbara Leighton

According to Barbara Leighton, A.C. stretched his own canvases and prepared them using titanium white paint and a palette knife. She said that he would sometimes mix the paint with other media to create a texture on the canvas. He would often paint coloured wash on the canvas before he began painting. He absolutely never painted from a photograph. 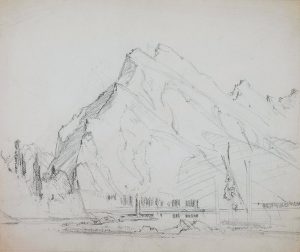 In preparation for painting, he would complete numerous sketches and studies en plain air or from life—in graphite, pastel, watercolour or oil—before beginning on his large-scale oil paintings on canvas. 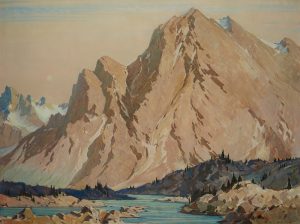 While A.C. was very serious about his practice, he was still down to earth and had great respect for the taste of “common people.” Barbara recalled that “he used to ask anybody to give him advice, […] if a truck driver came or someone was delivering water he would ask them to come in and look at his painting. Because although they used to say, ‘I know nothing about painting,’ they could detect something that wasn’t right.” Once he finished the painting, A.C. would sit on it. He would not exhibit or sell it until he had lived with the art for a year. It was only at that point he could tell whether the painting was acceptable to his demanding standards or not. Paintings that didn’t meet his approval were destroyed.

Though physically and mentally taxing, his commitment to his art did pay off. Proof of that are his exhibitions in England. A.C. was exhibiting with the Royal Society of British Artists in the late 1920s. By 1929 his work was hung “on the line” at the British Academy exhibitions at Burlington House in London and at the Paris Salon. At large exhibitions like this, the best paintings were honoured by being hung at eye level or, “on the line”, while the less desirable paintings were hung higher. 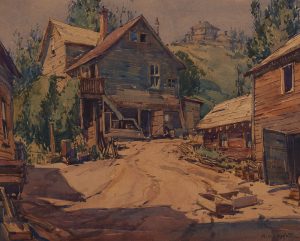 The same year, his work was given the honour of exhibition in Eaton’s stores across Canada, starting in Montreal in September and culminating in Saskatoon in November, just prior to his return to Calgary in December. The exhibitions received positive reviews and, in some cities, were extended by a week or two.

Master watercolourist W.J. Phillips wrote a very positive review of the Winnipeg show. “I have always felt a genuine admiration for this painter’s superb draughtsmanship, the quality of his color [sic], and for his handling generally. I have coveted many of his sketches. Now I proudly confess that I own one. It will remain one of my most treasured possessions.” Later that year, Phillips and Leighton would have a joint exhibition at the Edmonton Museum of Art (now the Art Gallery of Alberta).

In 1935, alongside Group of Seven member Franklin Carmichael, A.C. was elected as an associate member of the Royal Canadian Academy. The Vancouver Art Gallery held an exhibition of his work the same year. In 1939, he won “Best Painting” at the New York World Fair. Today, his work can be found in collections across Canada, notably the Glenbow Museum, the Whyte Museum of the Canadian Rockies, the Alberta Foundation for the Arts, and the National Gallery of Canada.

It is no doubt that between teaching full time, travelling for numerous exhibitions and maintaining his art practice, these demands took a toll on A.C. and resulted in the illness that eventually required him to resign from his post at the Tech. For years he’d dealt with injuries from a small plane accident when learning to fly during the First World War, frostbite from painting in the Rockies, exhaustion from teaching, and encephalitis. Following his resignation, A.C. would not paint for the next six years. He and Barbara returned to England for a time before returning to Canada where they settled in Chilliwack, British Columbia.

“Ace said once to somebody […] painting is like reading your love letters outside to a stranger.”—Barbara Leighton