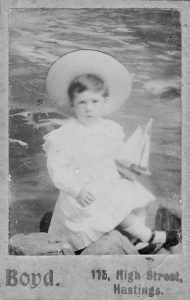 Alfred Crocker (A.C.) Leighton was born on October 27, 1900 in Hastings, Sussex, England. A.C.’s remarkable talent for drawing was discovered at a young age. As a child, A.C. developed his eye by drawing buildings and being entranced by nature. Initially, A.C. studied architecture according to his father’s wishes, but that was not what he truly wanted to do. When he received a scholarship to attend the Hastings School of Art at the Brassey Institute, his father was furious, still hoping that his son would become an architect. However, with some mediation by the headmaster of the school, Mr. Leighton reluctantly assented and A.C. enrolled.

Following art school, A.C. moved to London and taught briefly at the Dartford School of Art before setting up his own studio to work as a freelance artist. During this time, he continued to paint; he travelled around the countryside to paint the built architecture and the natural landscapes of quaint English towns. 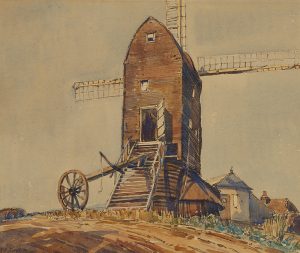 But that life was not enough for A.C. Even as a young man he had a desire to create something meaningful in this world. With the advent of the industrial revolution, windmills were slowly being replaced with mills powered by steam or internal combustable engines. Much like the plight of Canada’s grain elevators on the prairies and light houses on the east coast, windmills across the United Kingdom were slowly disappearing.

Because A.C. recognized the danger England’s historic windmills faced in a modern world, he formed the Society for the Preservation of Windmills, not the last society he would found. He worked hard to capture many windmills in pastels and watercolours, preserving them as well as he knew how. But that didn’t stop the slow deterioration of windmills across the country. In 1924, after painting Hog Hill Mill in Sussex, Leighton wrote to local newspapers. Sending several of his windmill paintings, he entreated the papers to encourage the preservation of these historic English landmarks. The paintings were published and subsequently Leighton began to receive letters, from as far away as Australia, urging him to continue recording windmills in his art. That fame grew until The Hog Hill Mill watercolour was exhibited in the 1929 Paris Salon. Afterwards, the English government commissioned A.C. to draw Britain’s windmills so that when they decayed or were torn down a visual record would remain.

But those weren’t the only people to note his ability. In 1926, encouraged by his teacher at the Hastings School of Art, Edward Leslie Badham, A.C. submitted some of these watercolours to the Royal Society of British Artists. After some tense waiting, he was accepted as the youngest associate member. A few years later, at the age of 29, A.C. became the youngest person to be elected as a full member of the Society.

The Hastings Observer, proud of their local man, declared that A.C.’s “rise to full membership is notably rapid.”