Ballyhamage was a welcome refuge after years of travel. They’d visited most of  Canada and the United Kingdom throughout their marriage, but in 1955 the Leightons purchased this land just south of Calgary, Alberta, where they built their final home. Together, they enjoyed the inspiration of the Rocky Mountains, and all the other breathtaking sights, in the vast panorama visible from their windows. 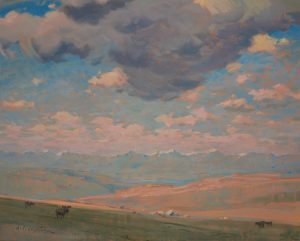 As always, painting was the cornerstone of their life. A.C. was able to paint or draw every day, despite his failing health. His routine was to wake early and listen to classical music until 8:00 am. The rest of the day would be devoted to painting. Often, he forgot to eat because nothing could distract him from his purpose.

One of the notable commissions in his later years was from The Seagram Company. They commissioned A.C. and twenty-one other Canadian artists, to paint twenty-nine cities across Canada. In 1953 Seagram’s Cities of Canada collection toured internationally across Latin America and Europe before travelling across Canada in 1954. A.C. chose to paint Calgary at sunrise from Rotary Park north of the Bow River, overlooking the Centre Street Bridge. 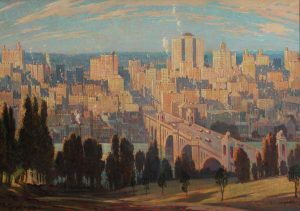 Calgary in the Foothills, 1951 from Seagram’s Cities of Canada

Another noteworthy event happened in 1956 when Canadian Art Galleries exhibited fifty-one of A.C.’s watercolours. The following year The Edmonton Art Gallery showed twenty-five of his paintings from the collection of J.F. Baron, who was the President of Alberta’s Union Tractor Ltd., and close friend and longtime correspondent of A.C.’s.

Then, in 1960, one of A.C.’s watercolours won a prestigious international award. But it wasn’t A.C. who was honoured. Frederick Arthur Cane, a daring young art student, broke into the Leightons’ home and stole twenty-four pieces of art. Frederick deftly covered A.C. Leighton’s signature with his own and entered it into an exhibition at the Art Instruction School of Minneapolis; he won first prize. Then, bursting with confidence, Frederick entered two paintings in the Calgary Stampede the following year. His plan was foiled when Marion Nicoll, a judge for the competition and a dear friend of the Leightons, spotted the fraud. To the end, A.C.’s work was well respected and recognized.

Shortly before his death A.C. was made a Fellow of the International Institute of Arts and Letters. This was one of the leading learned societies of its day, including many noted writers, artists and musicians. A.C. was in excellent company. 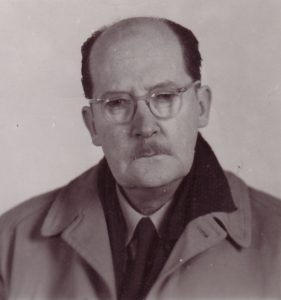 After decades of being plagued by illness, A.C. passed away in 1965.

A.C.’s life and actions left a significant legacy for all Albertans. Since his passing, several retrospectives have been shown, honouring his long career. Lorne Render curated the first posthumous retrospective in 1971 at the Glenbow Museum. A second retrospective organized by Roger Boulet and the Edmonton Art Gallery toured across Canada in 1981 and another exhibition would be held at the Whyte Museum of the Canadian Rockies in 1989. These retrospectives covered but a fraction of his life’s work.