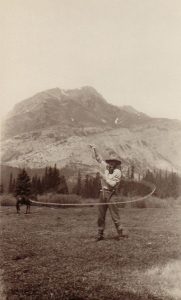 The Canadian Prairies and the Rocky Mountains would be the dominating subject throughout A.C.’s lifetime.

His love for the West began in England, before he ever set foot in Canada. His teacher, Edward Leslie Badham, was a lover of the western genre and introduced his former student to the Western Canadian lifestyle through the 1924 British Empire Exhibition at Wembley. A.C. might have witnessed a genuine rodeo there: roping, steer wrestling and bronc riding demonstrations by the best Canadian and American cowboys and cowgirls of the time. It seems certain that the first beginnings of his love began there.

With that fascinating experience to drive him, upon arriving in Canada the west called out to him. A.C. was always an adventurous spirit; it is no surprise that he ended up spending much of his time in the rugged Canadian wilderness in search of his ideal subject matter. He joined the Trail Riders of the Canadian Rockies during one of his first visits to Canada and trekked with them into the mountains, searching for the right vista. He travelled with the Trail Riders many times over the years, painting and sketching along the way.

This was at the same time that Canada’s famous Group of Seven were active. Group members, Lawren Harris, A.Y. Jackson, Arthur Lismer and J.E.H. MacDonald, travelled to the Rockies during the mid and late 1920s, the same period that A.C. was there working for the CPR. Early on, the Group of Seven artists came together as a result of a common frustration with the conservative quality of most Canadian art at the time and the desire to create a distinctly Canadian style. Their work moved from true representational painting towards a more simplified and spiritual depiction of the Canadian landscape. A.C. Leighton, on the other hand was a staunch supporter of the academic, English landscape tradition, which he used to represent the Canadian wilderness. 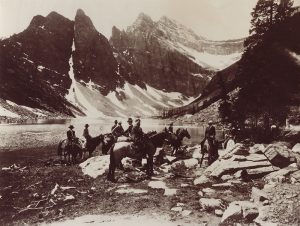 Trail Riders of the Canadian Rockies, circa 1927

The mountains were a welcome challenge to him as neither the cold nor the black flies and mosquitoes deterred him. His need to paint the mountains was stronger than anything he experienced along the trail. Former student and fellow artist, Bernard Middleton even said that the mountains were adversaries that A.C. had to conquer. Middleton witnessed A.C.’s fortitude in the wilderness the many times they travelled together. They were so driven that they happily lived on just Spanish onions and sliced beef while in sleeping bags on the cold, bare, ground, devoted to the quest of finding the right subject matter. 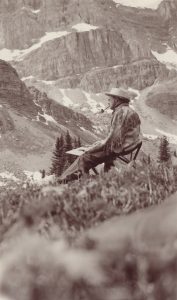 A.C. Leighton painting at the Valley of the Ten Peaks, no date

Next to a blazing fire after a day of riding to Mount Assiniboine Pass, A.C. wrote of the extreme challenges faced by the riders:

“The deep drifts made it impossible to reach as one could not tell where the edge of the rocks were. After more skilful manoeuvring we collected the animals. On top it was blowing a blizzard and nearly dark. The snow fell like red hot cinders on the face and hands. […] When I unwind my outside clothing and hat which was covered with snow had turned to ice like a suit of armour and tin hat. We made camp tonight in the dark. The food we had brought was all frozen.”

Despite the cold, he managed to complete several pastel sketches, blowing the snow off “quite easily like dust”.

On another trip near Banff, A.C. suffered from severe frostbite after sitting in freezing temperatures for a few hours. “Most of his work was executed while he was waist deep in snow, his easel sunk almost out of sight, the pigments on his palette stiff, his brush probing, almost thumbing the work into the canvas.”

The mountains were hard and cruel to A.C., but they had a grandeur that he was driven to capture. One can recognize the sublime in his work; terrific storms, dramatic skies and towering mountains underscore the power of the land that had such a hold on him. 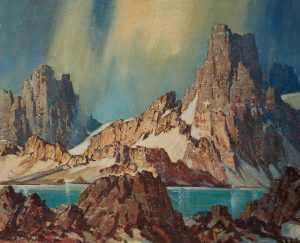