When A.C. died, Barbara chose not to remain alone in their country house mourning the loss of her husband. Instead, with the encouragement of their friend Marion Nicoll, Barbara decided to return to the arts college where she and A.C. first met. 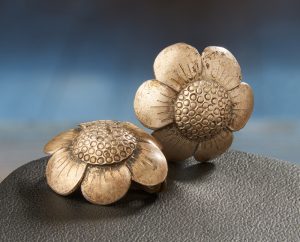 At the Alberta College of Art (ACA), with a full scholarship, Barbara studied jewellery, fibre arts and printmaking. She didn’t want to be a painter after having been married to one of the best in Alberta. So, Barbara chose to study the more “intuitive” arts. Her classmate, Wendy Toogood, described Barbara as willing to “jump in and try anything.”

“When I see a piece of silver I just know what to do with it. And it’s that way with all materials.” —Barbara Leighton

Barbara had an exceptional eye for colour and design that she put to good work at ACA.  She used block printing and batik to dye fabric, which she then sold. Seamstresses bought this fabric and transformed her textiles into amazingly beautiful wearable garments. Her friends remember Barbara stirring her dye vat on the stovetop in a large pot, the same pot that she would later rinse out and use to make soup!

Because of the skills she brought to ACA, Barbara won the Visual Arts Award for Fine Arts and Craft two years in a row. She graduated in 1969 with a Degree in Fine Craft and Metalwork. 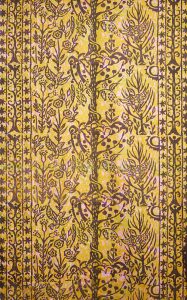 Upon the recommendation of Alma Houston, (wife of James Houston who was instrumental in teaching Inuit artists printmaking techniques and promoting their work throughout the rest of Canada and the United States), Barbara was invited to go to Ulukhaktok, formerly Holman. There she would demonstrate batik, silkscreening and weaving to the artists at the “Holman Eskimo Co-operative”, now the Ulukhaktok Arts Centre. At the time, only seven elderly artists were working at the cooperative. The younger generations did not seem interested in the traditional techniques, so the cooperative began looking for new mediums to bring to Holman.

In the summer of 1972, employees of the cooperative, Monique Piche and Father Henri Tardy, travelled from the Arctic to the Leighton Centre to meet Barbara. That fall, Barbara travelled to Ulukhaktok where she worked with the Inuit artists and taught them about her artistic mediums. 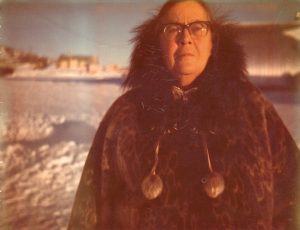 Barbara was made a Member of the Alberta Society of Artists 1976, 45 years after her husband co-founded the organization. While married to A.C., Barbara strongly believed that there could be only one artist in a household and she made it her mission to support her husband, the artist. Only after his passing did she allow herself to come into her own as an artist.