Barbara firmly believed that nature was the best inspiration for the creation of art and she long had a dream to share her rural sanctuary with her community. Her goal was to establish a rural art centre where rural people, most specifically farm wives, would have the opportunity to find a brief respite from the hard work of farming to learn a craft and to fulfill themselves creatively. Barbara soon found that it was not rural women but people from the city who wanted an escape to the country to learn fine craft skills. 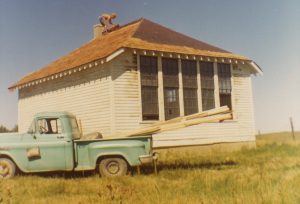 To fulfill that purpose, she started classes in a workroom in the house almost immediately upon graduation from the Alberta College of Art. The number of students quickly outgrew the space. So Barbara, determined as ever, sold 80 acres of her quarter section to purchase the Ballyhamage schoolhouse. As it was located on the property just next to hers, it would prove a perfect place to offer classes. Sculptor and jeweller, Stan “Zared” Racher renovated the old building and converted it into an art studio where Barbara began to teach.

Once the schoolhouse opened, Barbara had classes for adults during the week and devoted Saturdays to children. Summertime would also be dedicated to children, and busloads of children came out. Painting, pottery, silversmithing and weaving were some of the first classes that Barbara offered in her one-room schoolhouse. She invited friends and artists from art school to the schoolhouse to teach and take classes.

The grand opening of The Leighton Centre took place on November 1, 1970, with a celebration that included over five hundred guests. Refreshments were served and an exhibition of local artists’ paintings, prints, sculptures, batiks, jewellery and ceramics were shown.

“Hundreds of people showed up, well maybe not hundreds, but certainly for our little old back road there was car after car after car.”
—Gordon Given 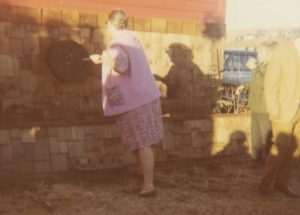 Barbara had purchased the Half Diamond LC brand and branding iron for the Leighton Art Centre. At the grand opening, Barbara branded cedar shingles that were leftover from renovations of the schoolhouse. New members received a branded shingle instead of a membership card. Recognizable amongst the names of new members are local celebrities including Peter Lougheed, Mary Dover, Stan Perrott and Marmie Hess, who were all friends of Barbara’s. 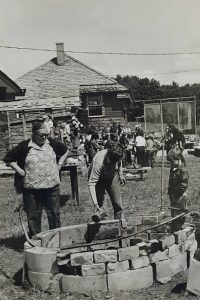 So many children and adults came out that Barbara’s art centre grew quickly enough that another building had to be added in summer 1971. Three years later, the Leighton Art Center officially incorporated as a society with the Government of Alberta. Eventually, the centre boasted a weaving studio, a pottery studio with wheels and kilns, and a woodworking studio plus the schoolhouse and Barbara’s in-house art gallery.