“She was a fine artist in her own right. She was one of A.C.’s top pupils. Of course that’s how they met. I guess A.C. was bowled over by her.”
—Heather MacEwan Foran 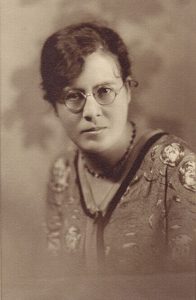 As a young woman Barbara enrolled as a night student in the art program at the Tech. Here she met A.C. Leighton in 1930.

Legend has it that when A.C. proposed, he gave Barbara $10 to buy a ring, but he encouraged her to purchase a good quality down sleeping bag for future excursions into the mountains. It seems that Barbara bought the sleeping bag, and with one dollar leftover, she purchased a snake ring which she wore for the rest of her life.

They were married early in the morning on May 31, 1931. The next day, the newlywed couple began preparations to set off into the mountains. “This being a truthful account of a Journey made into a pleasant but ruff country by Barbaric and Barbaric Ace” was how Barbara’s honeymoon journal, and their marriage, began.

On June 4th, they set off into the wilderness of Kananaskis Country. The sun was high and bright as they embarked upon the first leg of their journey from Bragg Creek up through the Elbow Valley. Over the next few days the couple encountered various struggles, stubborn and wandering horses, a difficult spot in the trail where one of the pack horses nearly slipped over a cliff and inclement weather. Eventually, they reached Elbow Lake, and according to Barbara, it was worth the journey.

“[…] we were standing at the top of the cliff panting and blowing but well pleased that nothing had occurred to delay us. The trail now was very high. Peaks like the illustrations for a fairy story set in the Alps, pointed pinnacles and sheer rock. The most fantastic and fanciful mountain, blue and grey and white.”—Barbara Leighton 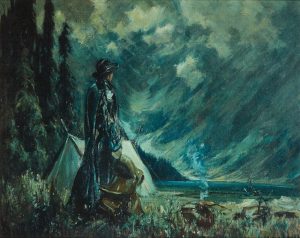 On a later trip up near Mount Assiniboine, the couple encountered severe weather and were forced to remain in the tent because of the heavy snowfall; they were stranded for nine days. They were unable to get out of the tent to make a fire and had to keep the food in their sleeping bags so it would not freeze. To pass the time, A.C. made a cribbage board with a piece of watercolour paper and they used matches as pegs.

These pack trips were but a small portion of the adventures the couple would share over the thirty-five years of a happy marriage. They were very different people, but as Barbara said, it worked well for them. Together they devoted themselves to art.