Skip to main content
The Rebellion boxes are some of the most prized artifacts in the Sharon Temple’s collection. These small wooden boxes were handcrafted by prisoners from the Rebellion of 1837. They crafted them as they awaited their trials in jail. 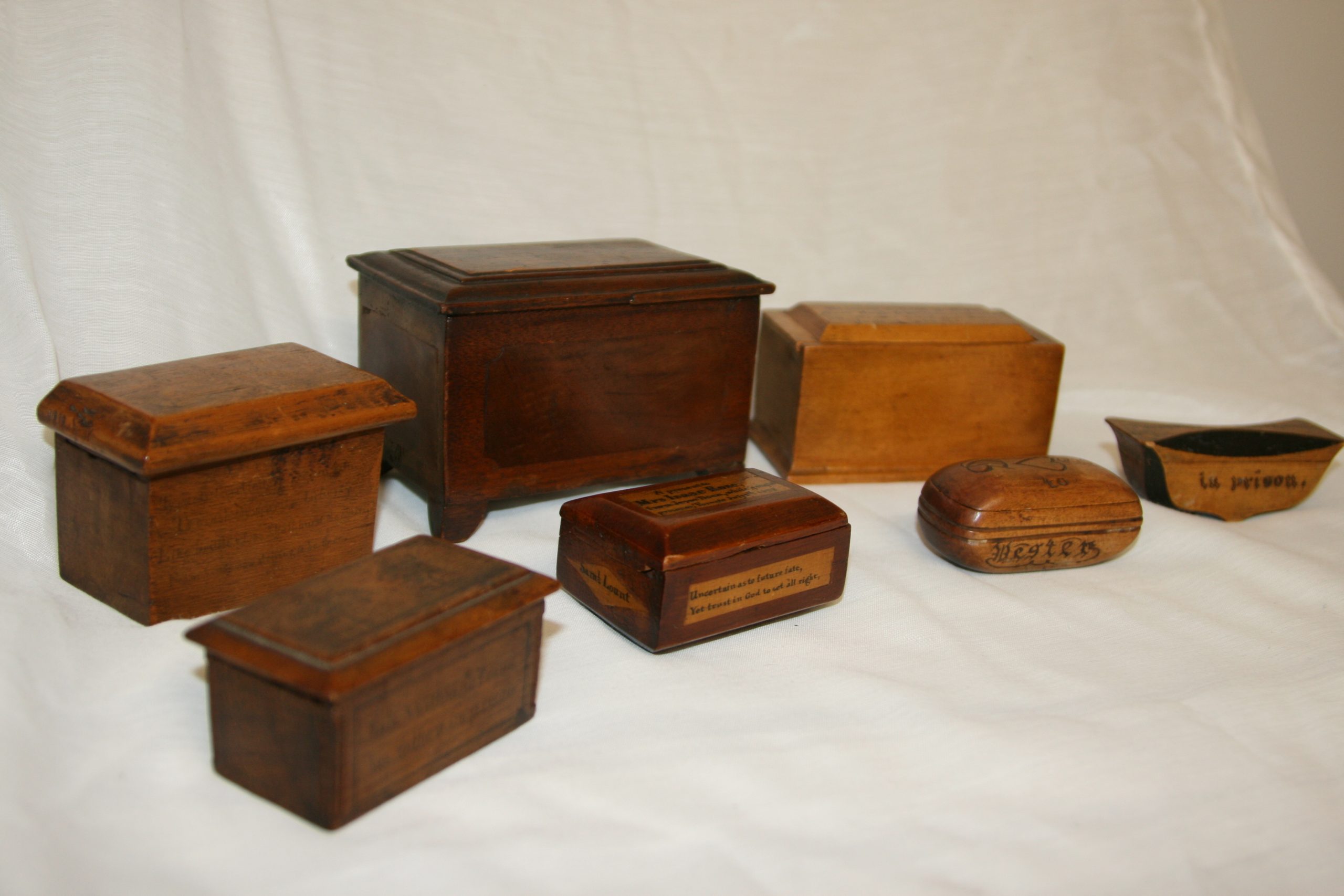 The seven rebellion boxes made by imprisoned rebels that are in the Sharon Temple’s collection.

After their defeat at Montgomery’s Tavern on December 7th, 1837, almost eight hundred prisoners were rounded up. Over half of them were locked in the Toronto jail. These prisoners were men from Upper Canada who had either taken part in the Rebellion or were sympathetic to the cause.
During their months in jail, the prisoners used smuggled tools and the firewood given to them by guards to whittle and carve boxes.
The boxes they made were for friends and family members back home. They were more than souvenirs. They carried inscriptions for their loved ones and tributes to their fellow prisoners. The boxes are evidence of the prisoners’ personal affections and ideals. They reflect their insights, faith, moods, and emotional state while in prison.
There is no record of exactly how many boxes were crafted. Historians such as Chris Raible, along with the York Pioneer and Historical Society, have created a record of at least ninety-four boxes created by more than fifty prisoners. The Sharon Temple currently houses seven Rebellion boxes in its collection.
Box 1 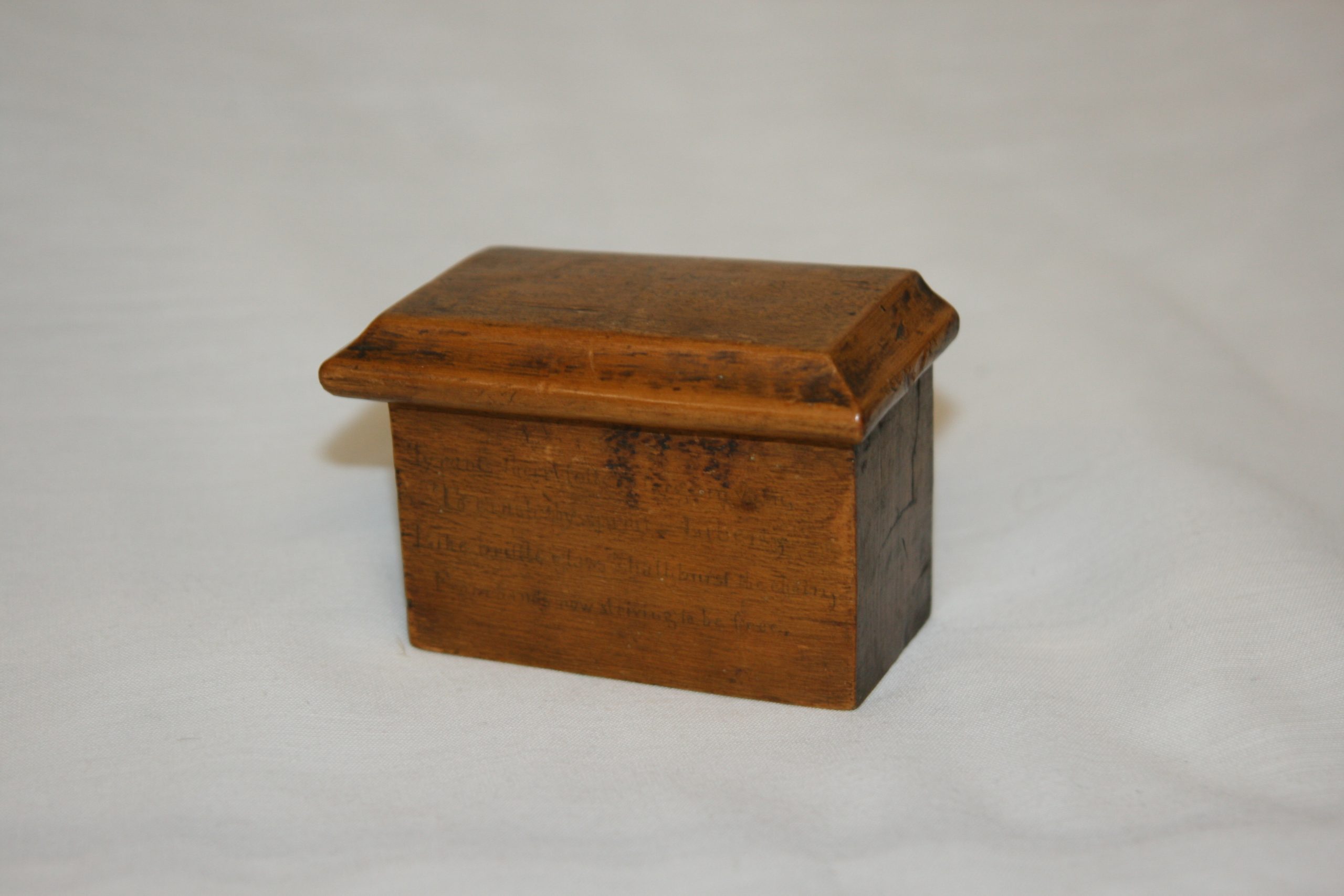 This rebellion box is made of maple and was intended for Mrs. Jane Anderson. Like the other rebellion boxes the lid slides out and is adorned with very faded scripture.

Creator: unknown
Material: Maple
Inscriptions: Lid “Mrs Jane Anderson”. Side “Lount and Matthews executed Apr. 12, 1838”. Side “Tyrants shall fail…To crush they spirit of Liberty Like brittle glass shall burst the chains From hands now striving to be free.”
Box 2 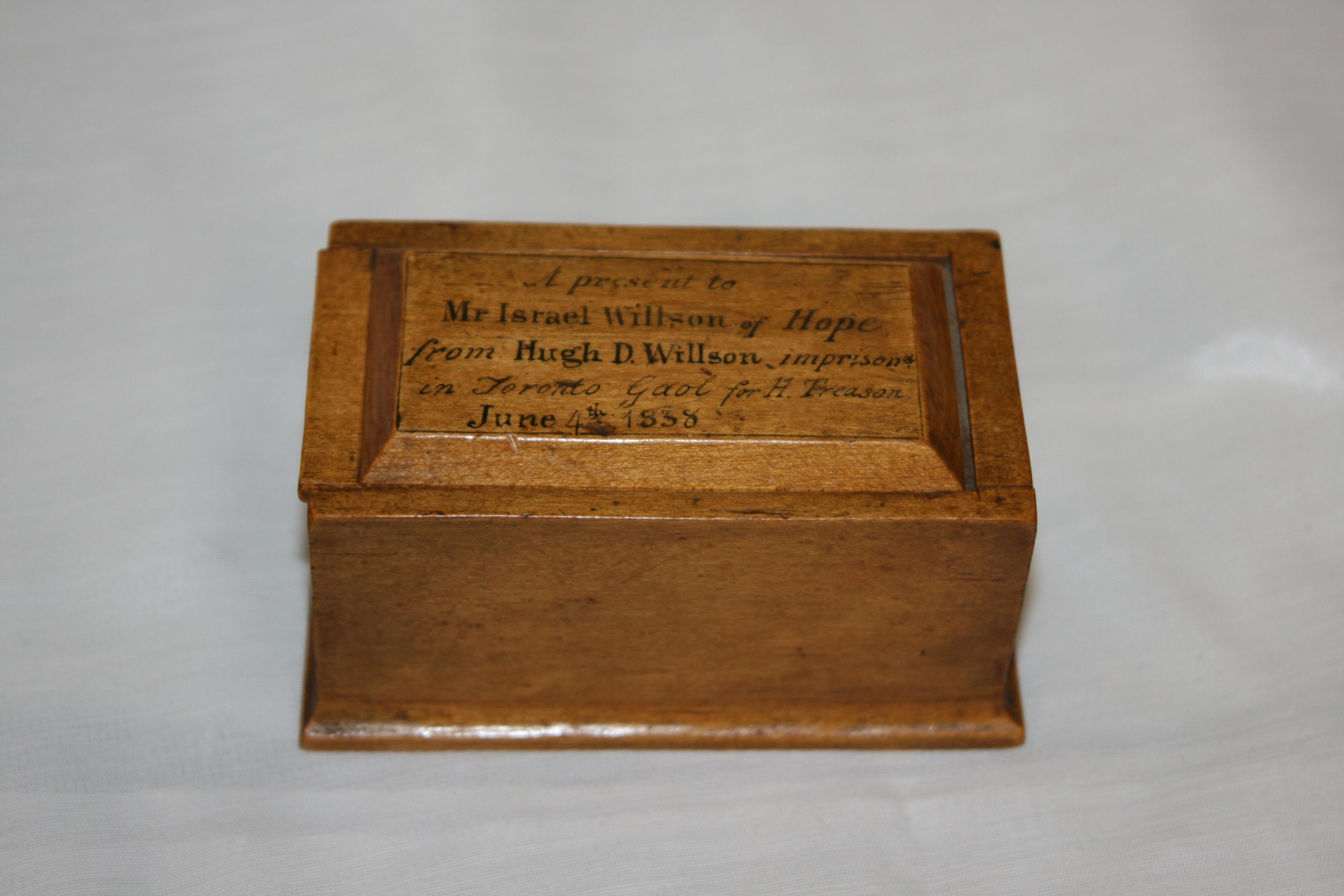 This rebellion box made of hard maple by Hugh D. Willson for Mr. Israel Willson of Hope. Hugh hand made the box, varnished with a sliding lid, and engraved it while imprisoned in Toronto Gaol for High Treason in 1838. 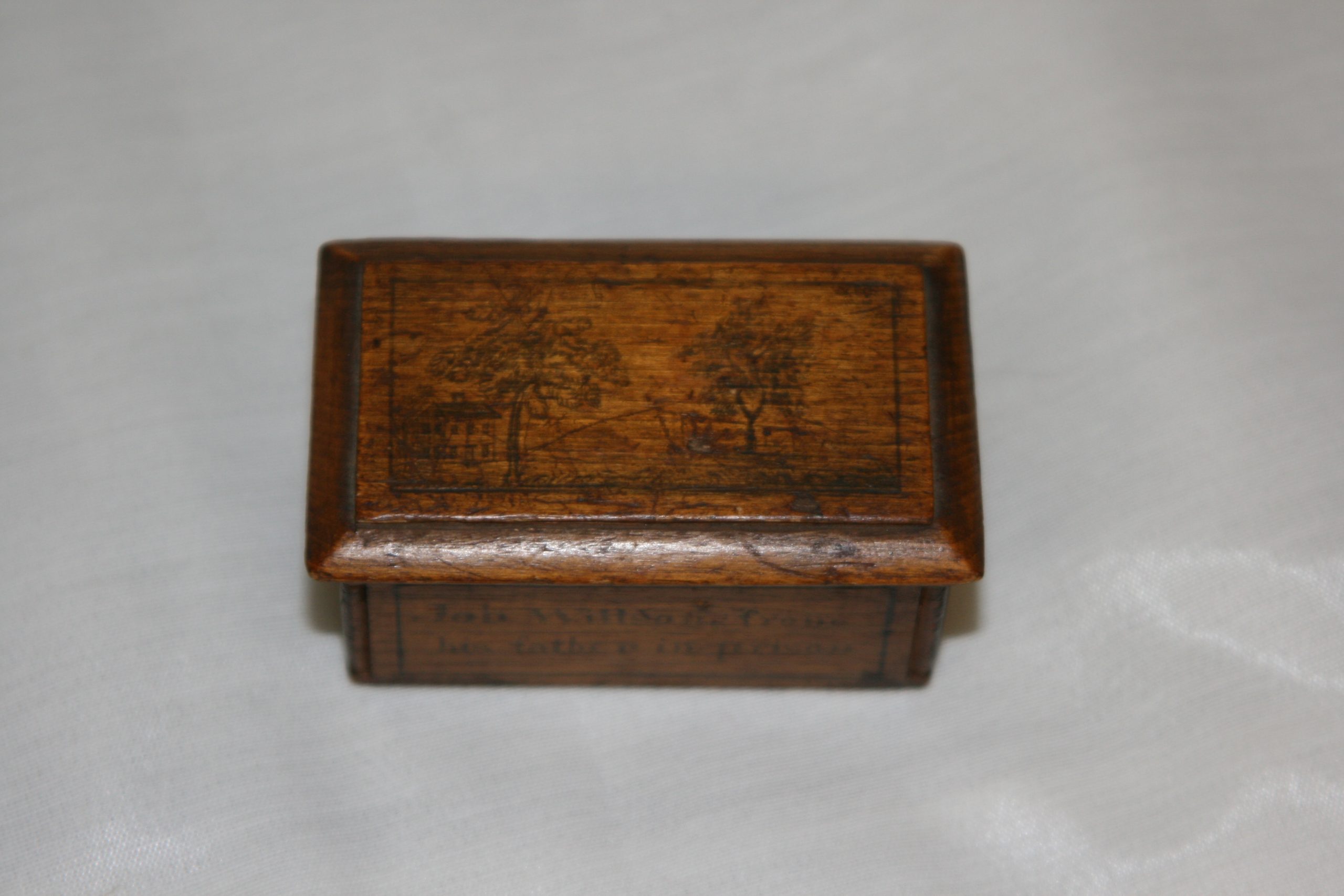 Small rebellion box made by John David Willson for his son, Job Willson. The box has a sliding lid engraved with a picture of a small house with several trees. The sides of the box read “Lount and Matthews executed April 12, 1838” and “Job Willson from his father in prison” 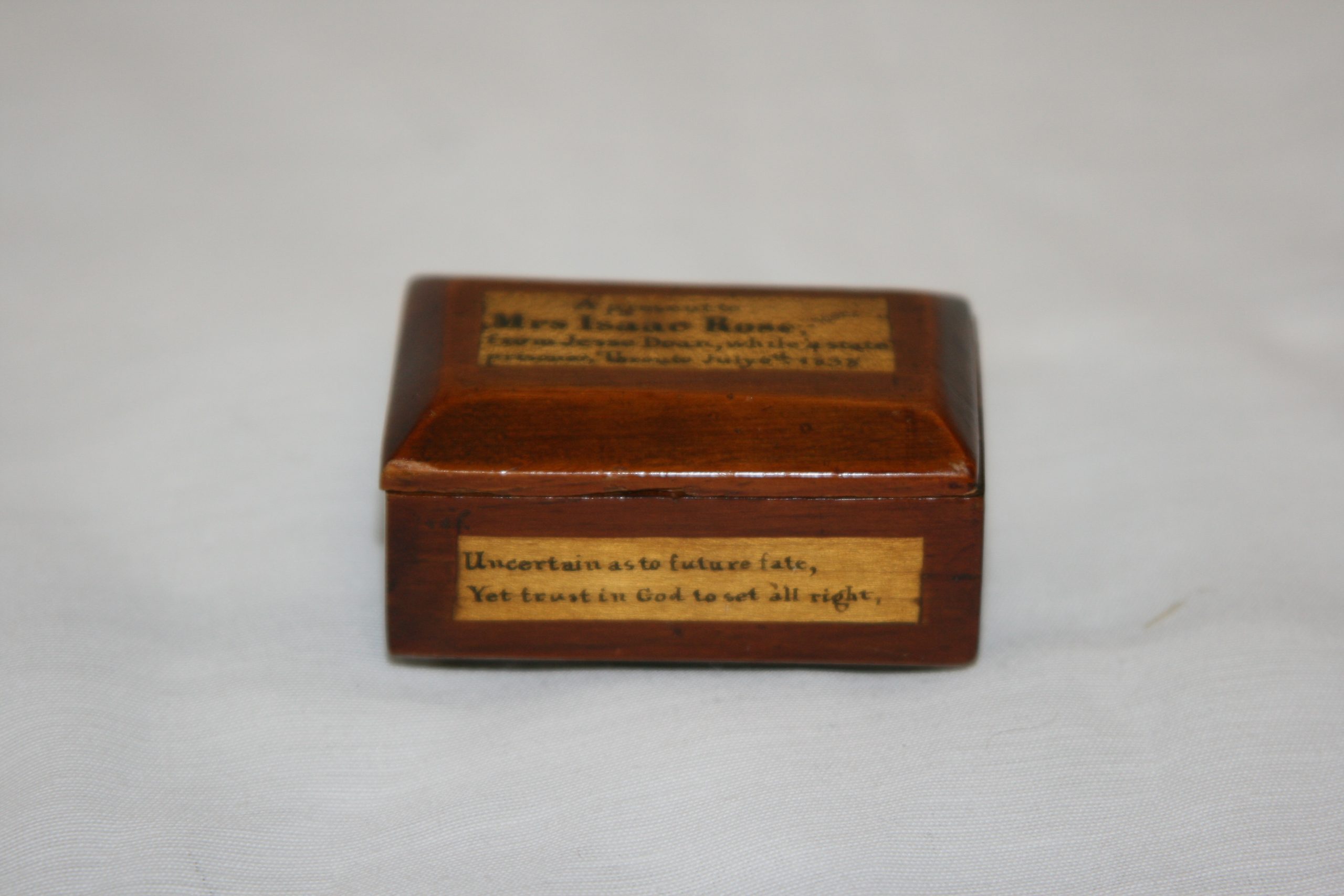 Rebellion box made by Jesse Doan for Mr. Isaac Rose. Each side is adorned with black ink script that reflects the faith of Jesse Doan while a state prisoner.

Creator: Jesse Doan
Material: unknown.
Description: Rectangular-box, lighter brown square on four of the sides and a lighter diamond inlay on the other two sides.
Inscriptions: “A present to Mrs Isaac Rose from Jesse Doan, while a state prisoner, Toronto July 6th, 1838.” “Off clinging to the massy grate, To catch a glimpse of heaven’s fair light”, “Uncertain as to future fate, Yet trust in God to set all right”, “Now Summer in her robes at green, Look smiling fair and gay, Yet not a charm for those are seem whose rights are torn away.” On two sides are the names, “Peter Matthews” and “Samuel Lount”.
Box 5 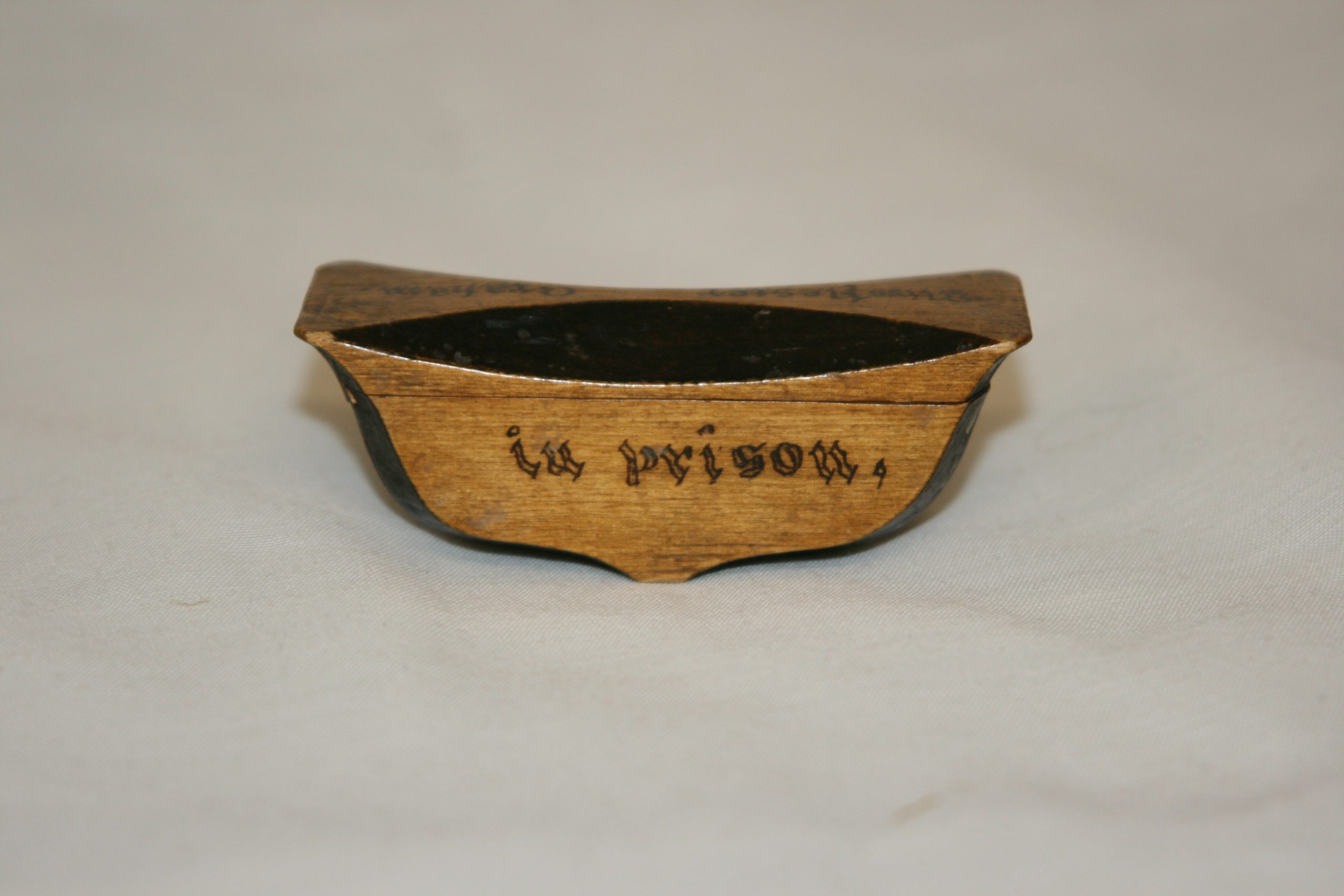 Rebellion box with black ink decor and a rocking bottom made by John Graham for his sister Miss Hester Graham.

Creator: John Graham
Material: Maple
Description: Script highlighted in black ink.
Inscription: “Miss Hester Graham from her brother in prison, Toronto, 1838”. The word “Liberty” is at each end of the sliding lid.
Box 6 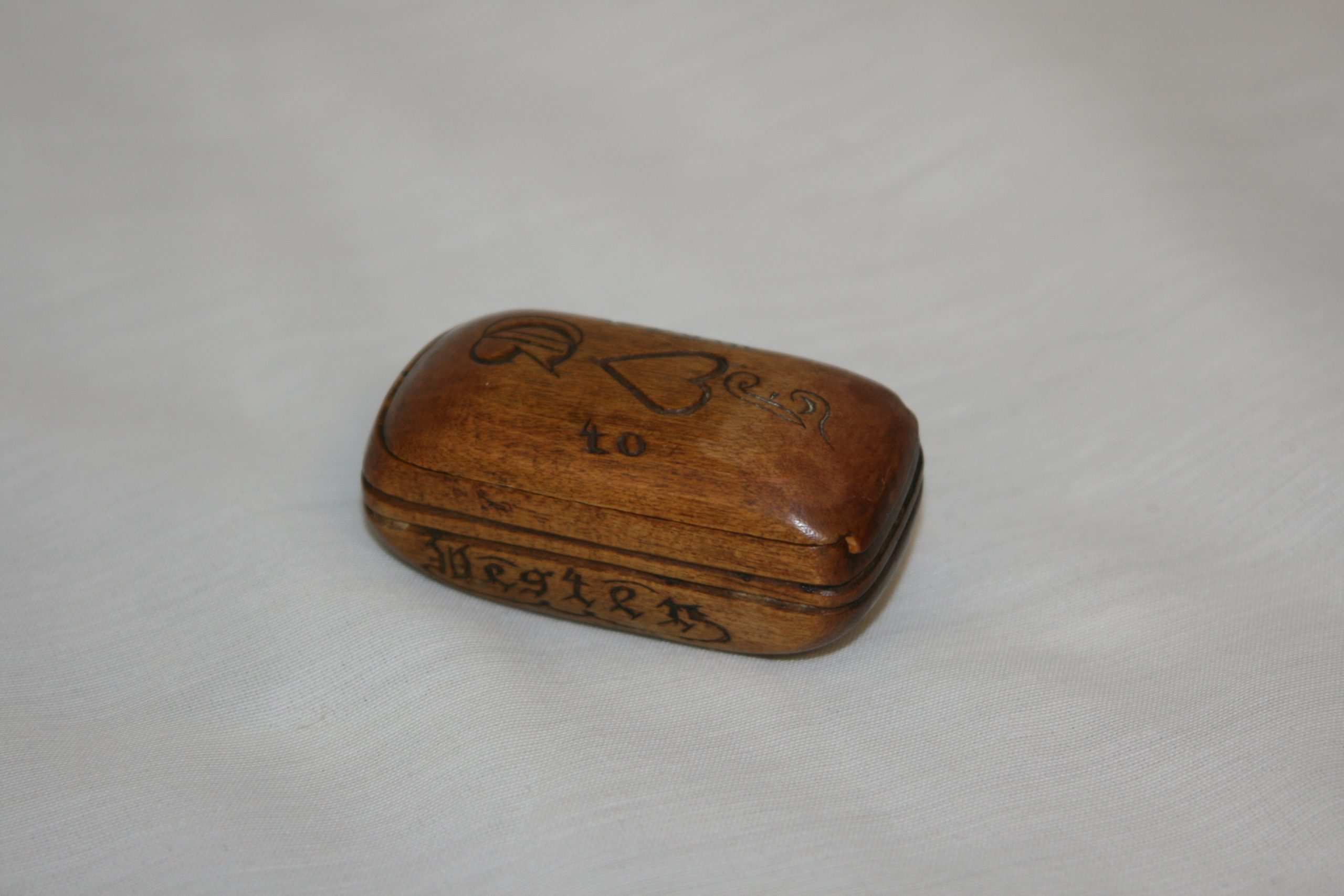 Rebellion box made for Hester Graham from a F.G. All the corners are rounded and the lid is adorned with an engraved heart. 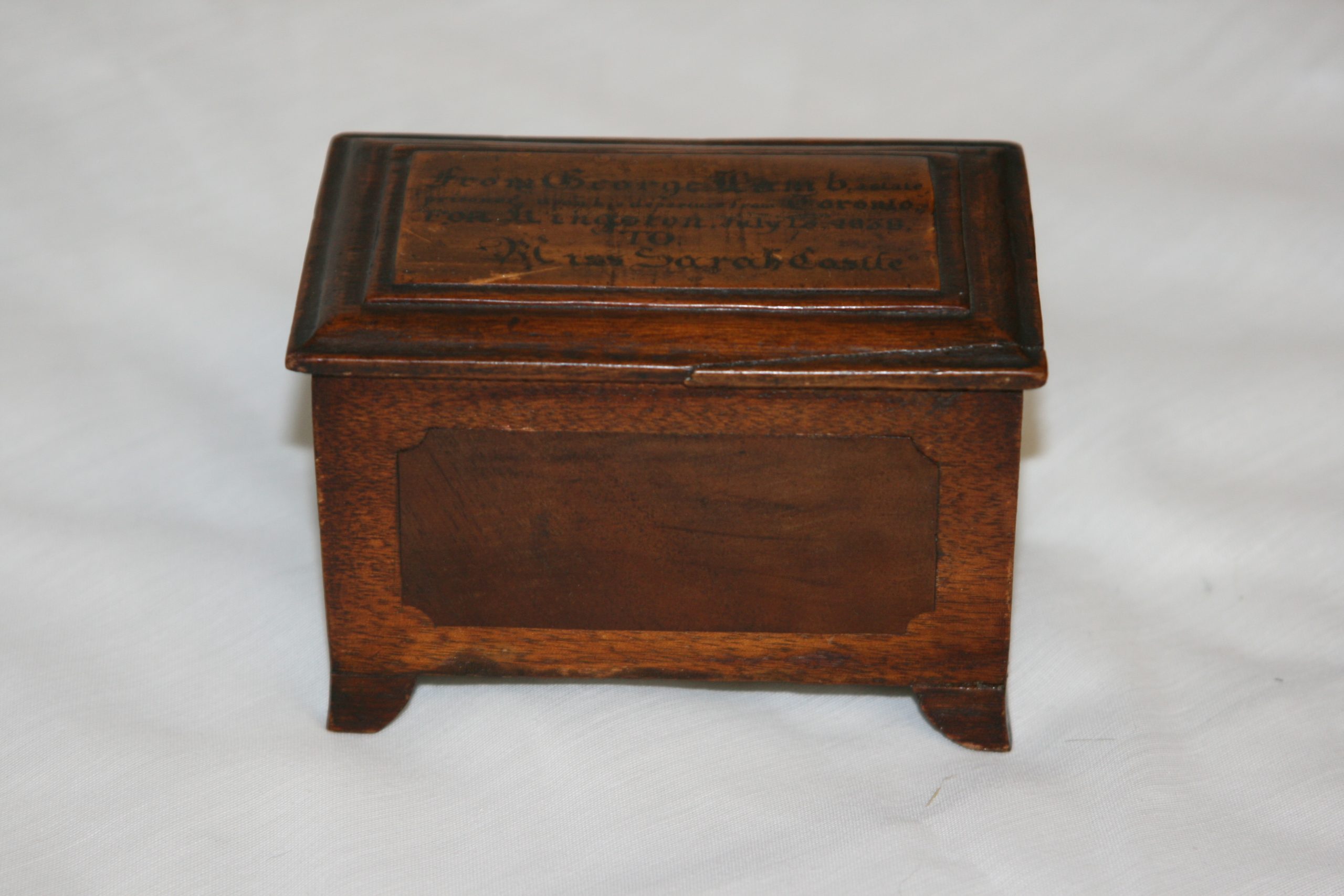 The largest rebellion box of the collection made by George Lambe for Miss Sarah Castle while he was imprisoned for his role in the Rebellion.

Creator: George Lambe
Material: unknown
Inscription: “From George Lambe, a State prisoner, upon his departure from Toronto for Kingston, July 13, 1838, to Miss Sarah Castle.”
Note: Sarah was 14 when she received this box. She later married Edward Pease in 1846.
Imprisoned Rebels Aftermath in the Children of Peace