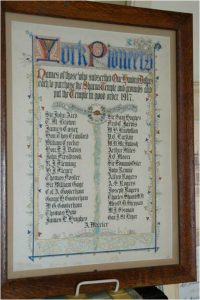 The York Pioneers scroll naming those who restored the Temple in 1917.

The Children of Peace built the Sharon Temple between 1825 and 1832. This architectural symbol reflects on their values of peace, equality, and social justice. After the dissolution of the Children of Peace, the Temple sat empty and neglected. Its reopening in 1918 as a museum by the York Pioneer and Historical Society restored it to its full glory.

The Temple’s restoration is an early example of historic preservation in Canada, and it saved the Temple from demolition. In 1990 the Temple became a designated National Historic Site, due to its historic and architectural significance. Today the Sharon Temple Museum Society owns and operates it.

The Temple is 60 feet by 60 feet square with four doors opening to the north, south, east and west. This was to ensure that everyone entering the Temple arrived on equal footing. The Temple is three storeys high. To some, this would represent the Trinity.

The exterior of the Temple features twelve lanterns (one on each corner of each storey) to represent the Twelve Disciples and the Twelve Tribes of Israel. At the highest point of the Temple is a golden ball with the word “peace” on it. This is to represent the world at peace. The Children of Peace believed that the four virtues of faith, hope, love and charity could lead to a world at peace. 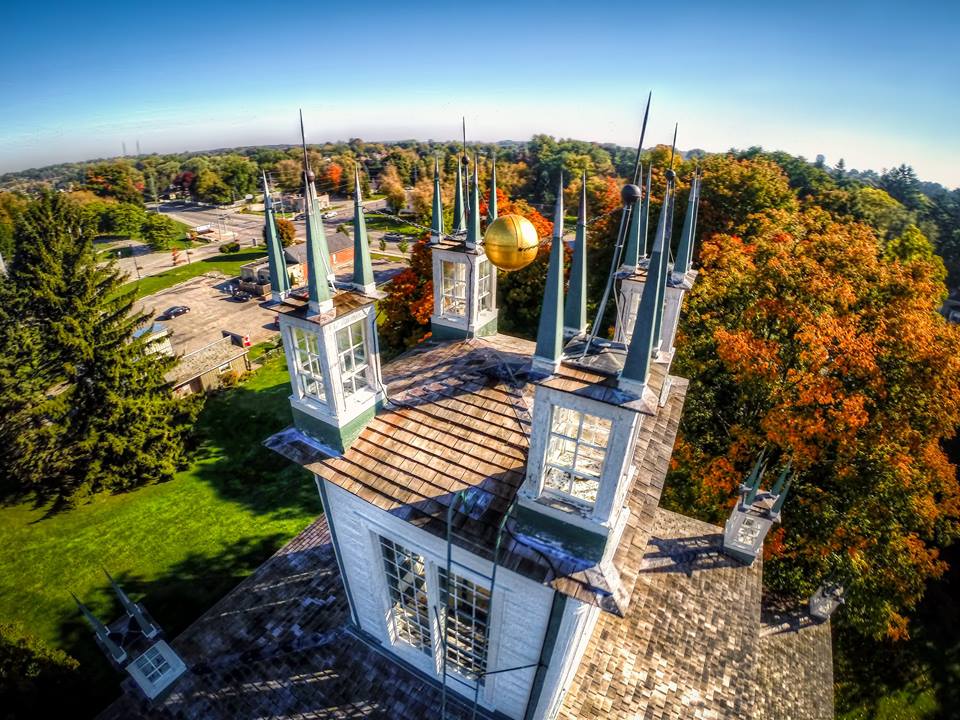 The golden ball on the very top of the Temple 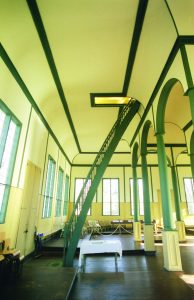 A photo of Jacob’s ladder inside the Temple.

When entering the east door, visitors would face “Jacob’s Ladder,” a steep set of stairs used by members of the band to reach the musicians’ gallery on the second floor. Musicians would play in the gallery and allow their melodies to cascade downwards. Sounds would bounce off the altar below and fill the temple with music. The altar intended to remind worshippers of the Jewish Ark of the Covenant. Master builder Ebenezer Doan’s brother, John Doan, designed and built it. Inside the altar or ark is a Bible open to the Ten Commandments.

The Temple’s inspiration is Solomon’s Temple from the Old Testament and New Testament. It was a monthly meeting place for the Children of Peace. They met to collect contributions to their Charity Fund. A highlight of these gatherings was when members walked to the altar to make their donations. These donations supported their schools and a shelter for the homeless, as well as sustained a fund from which members could borrow in times of need. 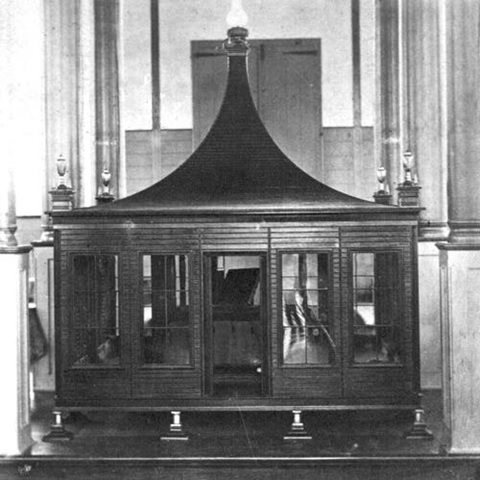 The ark that sits in the center of the Temple. 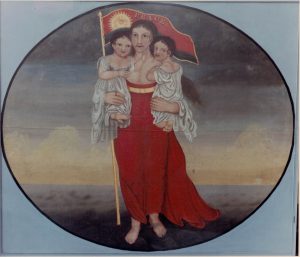 The painting over the north door shows a woman in red with two children in her arms. This represents a new church embracing Christians and Jews. These two children are also showed in the painting over the west door. They are alongside a dove carrying a message of peace from God. These paintings are by Richard Coates, the builder of the two organs on display in the Temple. 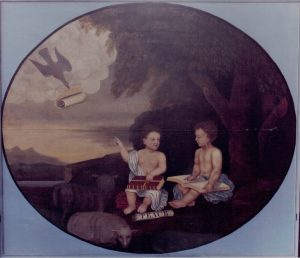 The smaller organ dates from 1820, and the larger from 1845. Music was an important part of worship for the Children of Peace. Both organs were used during Sunday worship in the First and Second meeting houses.

The Temple was filled with chairs as opposed to benches or pews to accommodate upwards of 300 people. The floor of the Temple has several levels to it. This allows for equal viewing from all four sides, facing the altar.

Now please enjoy a virtual walk inside the Temple!