Please enjoy this virtual tour of the Sharon Temple. This tour is proudly brought to you in partnership with Point 3D Commercial Imaging.

At the west entrance of the Temple a central aisle leads to the center of the Temple.  The Temple’s pipe organ and piano are on the left, against the far wall. The barrel organ is on the same wall but near the back of the space. The North banner is also visible above the temple’s side door. The West banner is mounted above  the door you just entered.  Simple wooden benches line the exterior walls and wooden chairs fill the meeting room.  Light from the central clerestory windows highlights the wooden Ark. An open bible, resting on a pillowed bench, can be glimpsed though the ark’s windows. The Ark is framed by four green columns, which  support arches that frame the opening to the second floor. This central space is framed by a larger open space defined by four columns on each side. Arches connect these columns as well. Jacob’s ladder is on the far side of West entrance, just opposite the eastern door. It leads up to the second floor.

The Doan House is a large one for the time period, and it is built in a British/German square style imported from Pennsylvania, similar to what Ebenezer Doan would have grown up with. The door opens directly into the kitchen, making it as the heart of the home, where family and friends are welcomed. Along with the kitchen, the main floor consists of a parlour, study, scullery and pantry. The upstairs features three bedrooms and a spinning loft with access to an attic. 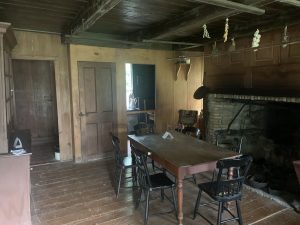 Kitchen of the Doan House. 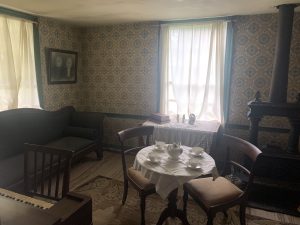 Parlour room of the Doan House.

Jesse Doan built this single room log cabin with the ‘wattle and daub’ method, using mud and sticks to seal the cabin, to ensure that no wind or snow could get in during the harsh winters. Inside there is a large wood stove, cupboards, a modest table, several chairs and benches, a dresser and a large wooden bed. Two spinning wheels and two skein winders complete the domestic display. 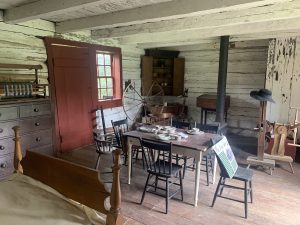 David Willson would use the Study for his writings. The design of the Study purposely mirrors that of the Temple. It is often said that it is the Temple turned ‘inside-out’, since the outside of the Study matches the inside of the Temple.  This relatively small structure has a much larger roof, which is supported on all sides by a colonnade. The interior of the study is well lit by its many windows. A small stove sits in the center of the space. The study also houses a bed, a small desk , a chair, and a small melodeon (musical instrument of the organ family). 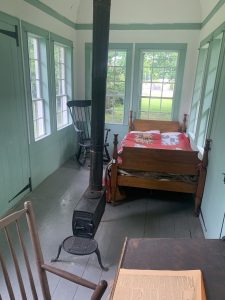 Ebenezer Doan’s wooden drive shed and lean-to, built in 1818, were used to store carriages and assorted tools, as they are today. The wooden buggy, with its large wagon wheels, was Ebenezer Doan’s. The Victorian horse carriage once belonged to Honorable Jacob Æmilius Irving. A cheese press, a turnip planter, horse drawn wheelbarrow and wheeled hoe are some of the tools also stored in the shed.

The Cookhouse was used as a place for the female members of the Children of Peace to prepare and cook feasts for the sect’s events. A large wood stove dominates the interior of this simple wooden building. Tables and chairs fill the rest of the space. There are also hutches and storage benches. A large butter churn and butter molds are also stored in this building. 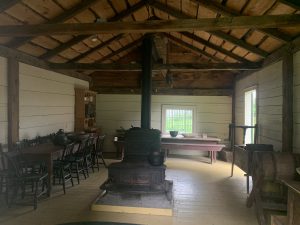 The cookhouse built in 1840 used to prepare feasts for the Children of Peace.

Visit the Road to Rebellion Exhibition