They studied in groups of eight families. They met weekly and read all the guide’s booklets together, taking turns and making sure that everyone understood the material. In the video you will see money changing hands – the weekly fee of $1 from each family. At the end of the year, the co-op had $15,000 and a great deal of knowledge. 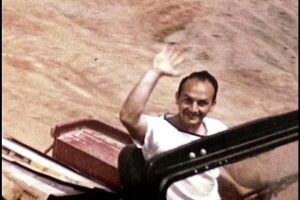 John Blake, seen here in 1956, recorded the co-op activities from the beginning. Here, he captured the study groups in homes and classrooms.  John Blake’s footage of the co-operative build is seen throughout these stories and is featured in the film titled, 60th Anniversary of the Grimsby Co-operative Homebuilding made by a co-op grandson Chris Tait in 2016 and is noted on the Reference page at the end of this exhibit.

This is a silent video.

Starts with TV static and fades into two people looking at a document.

A man with books on his lap starts to count out money.

Men are reading through documents smiling.

Man with a bow tie is speaking to a hall full of people camera is panning over the crowd.

Men sitting in a classroom.  Camera is panning around