Paddy Springs School was built in 1919 and named for the springs along the Rosebud River. It remained until 1942, when the Wheatland District built a new and centrally located school and provided busing for the area. The building was moved to the nearby community of Olds for reuse as a church. 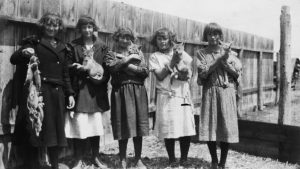 A hallmark of Alberta curricula was strict discipline in keeping with the values of self-control and obedience. The school inspector ‘laid down the law” during classroom visits to reinforce the teacher’s authority. Country school teachers could also count on the support of parents if discipline was meted out.

“There were no secrets with brothers and sisters going to the same school, everything would get home. If we got in trouble at school, we got more trouble at home.”

Methods of discipline varied depending on the teacher and the crimes.

“We would have to stand in front of everybody and write lines and they’d laugh; it was something you didn’t want to do. They would leave it there and rub it in a for little while, but you’d get your turn, then someone else would do something stupid too.”

Although most teachers were reluctant to use the strap, students do remember that it was a sanctioned option.

“… the strap was always a threat. They didn’t use it very often. I never had it, but my older brothers talked of being strapped a lot. By the time I came along it was frowned upon.”

Surprisingly, it was not until 2004 when the Supreme Court of Canada ruled that corporeal punishment was a not an acceptable way to maintain discipline in schools.

Despite tight rules and restrictions, children managed to sneak in pranks that still bring a chuckle.

“We’d make big paper airplanes and light the nose on fire and throw them around… smoke was coming out the back. One time it landed behind the piano and there was a fire…we had to move the piano, but we survived.” 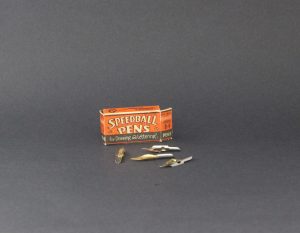 “The straight pen had a point, they were sometimes misused… the boys poked us. They got the strap on their hand. ”

“If we had a lot of snow, we put a plank on the roof of the barn, walk off the plank and jump off into the snowdrift.”

Blackfoot people held strong beliefs about discipline. They would not engage in any form of corporeal punishment. Children were to be celebrated, and if they did not properly grasp a lesson, it was simply considered developmentally inappropriate for that particular child. This approach stands in stark contrast to the disciplinary tactics suffered by Indigenous children in residential schools. Although for years churches attempted to describe their approaches as standard discipline, today they are widely and correctly understood as negligence and abuse.