Enjoy the video,  Silbernagle and Around the School Yard, with a transcription.

In 1910, the Silbernagel family donated land to build one of the first schools in the region. The close-knit community built “a true country school with all the families living close by.” The one room school had an addition built in 1926, and a second teacher, Mrs. Gallagher was hired. She and her husband taught at Silbernagel for ten years. In 1948, the building was moved and later torn down. The teacherage was moved and remodeled and is still in use as a home. 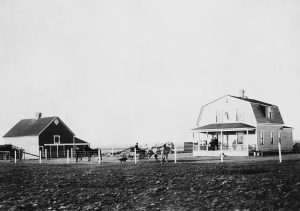 The first of four colonization houses around Beiseker to entice settlers to the area.

The outbuildings in schoolyards were also government regulated. There was a coal shed, and two outhouses for the boys and girls. As on the homestead, one of the most important priorities was the construction of a barn. Often it was built before the outhouses. The barn doubled as a makeshift clubhouse for the teens, giving some respite from the younger ones and from teacher supervision.

“The horse and buggy had to be prepared every morning and be fed and watered at noon. Every family had their horse kept in a stall during day at school. The barn was an excuse to get away for the older kids who had chores, the teacher had to supervise inside the school. The school barn was always a hangout for the bigger boys, they weren’t allowed to hang out in the barn too long. They could go out and do what was required, but they tended to get into trouble if they hung around the barn too long.”

The playground consisted of a swing set and a softball diamond. Extras such as teeter totters and other equipment was sometimes supplied by the community members. 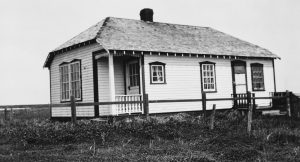 The teacherage for Silbernagel school.

Although some teachers boarded with local families, the government also provided blueprints for the community to eventually build a teacherage. The tiny two or three-room house had a kitchen, living room and bedroom. Outside was a small garden, and a water well. Heating was provided by a pot-bellied stove. Sometimes teachers were couples, but more often they were young single women. Teachers lived alone near the school with limited means of connecting with the outside world.