Enjoy the video, Brushy Lake and Warm Weather Fun, with a transcription

Brushy Lake School was built in 1926 and was named for the local lake. The school sometimes closed due to cold weather or low enrollment. During the Depression, it was difficult to raise funds to pay a teacher and expenses. As many other country schools, the building was sold and moved; students were consolidated with the Three Hills District in 1950. 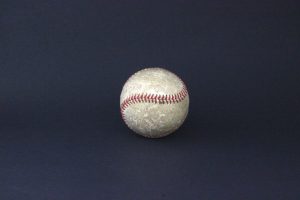 A baseball from the Beiseker Station Museum collection.

The close-knit settler communities surrounding Beiseker enjoyed visiting throughout the year, but warm weather allowed more frequent social gatherings. Many families would meet on Sundays for a well-deserved rest from the farm and chores.

“I remember when Edward VIII was king of England and we had a picnic. Then he quit and we had another picnic for King George VI. They were wonderful.”

In the late spring, schools held Sport’s Day to compete with other schools.

“A big thing was the track meet, we had competitions in high jump, running and relay races. (Nearby) schools would come down for competition.”

“The whole community came and brought food and we’d have races. It was a very fun occasion.” 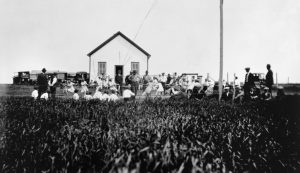 In the fall, the older children helped with the harvest. The boys worked in the fields and the girls would help with canning and cooking for the field teams. 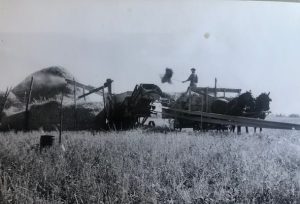 Even though warm weather meant hard work on the farms, the settler community made the best of it. They came together to share the load and enriched each other’s lives with friendship and encouragement.

Before the settler community arrived in Beiseker, summer was also a time of hard work and fun for Blackfoot children. Instead of taking the summer off, their education proceeded year-round. Summertime was an important opportunity to travel for trade and fulfilling relations, and also a time to prepare for the long winter.