Enjoy the video, Winter Season & Odessa, with a transcription

Odessa School was built in 1911 and named for the Russian city where many residents originated. The first teacher, Mr. Brownley, was hired for $650.00/year. By 1918, the community reluctantly agreed to consolidating with Beiseker, and Odessa School became a memory. 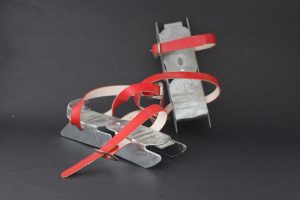 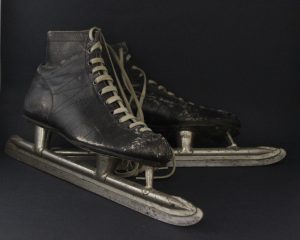 Blackfoot people had highly specialized knowledge of materials and craftsmanship to make warm and comfortable clothing for winter. The same was not true of settlers whose winter clothing was often unreliable.

The wind blew up the legs and arms of ill-fitting clothing. Snow collected in their boots as children trudged through the fields. Frostbitten children would be considered endangerment now but was accepted as an unavoidable hazard of life on the prairies.

“By the time you got to school quite often your hands (or feet) were suffering with frostbite and then you had to put them in cold water and suffer again while they thawed out. That wasn’t unusual.”

“I had to go east in the field ¾ mile and the snow up to the horse’s stomach. But the horse made it. In the spring it melted and washed out the bridge to the railroad. We had to fix it up and keep going. We had disasters, but we kept moving ahead and forward. ”

The cold did not deter the children from outdoor play at recess.

“It was always fun at recess. It was too short. Noon hour was too short. We used to go sleigh riding and would hang our wet clothes on the furnace jacket.”

There were fall suppers to celebrate the harvest and barn dances to get through the long winters. Halloween and Valentine’s Day brought some fun respite. Along with bitter cold and short days, winter also brought the magical season of Christmas. As the highlight of the year for the whole settler community, preparations for the concert began in October. 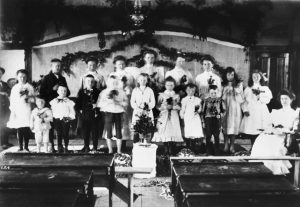 Everyone contributed to decorating the school. A tree was brought in and the school was warmly lit with kerosene lamps. At Beeman, a generator was brought in on the back of a truck to provide lighting. People came from far and wide to sing carols and share a lunch together. Santa Claus was novel for many children who were only familiar with the German Kris Kringle. Santa delighted the children with bags of candy, oranges and peanuts. In the days of hardship and rationing, these were very special once-a-year treats. Found written in the 1933/34 yearbook for the Calgary Normal School, “It is said that in a country district the worth of the teacher is gauged by the Christmas concert put on.”