Enjoy the video, Beiseker School & Consolidation, with a transcription

In the first year, school was held in Mr. Lount’s Implement Warehouse. The first teacher was E. V. Hughes, who was paid $75.00/month. In 1914, a four-room school was built on the site where the St. Mary’s Cathedral currently stands. In 1951, a new school was built at its present location on 2nd Avenue in Beiseker. 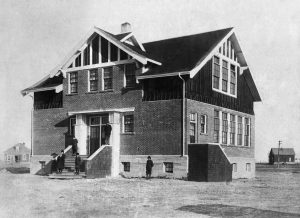 The second school built in Beiseker.

In the 1930’s, Alberta had more than 3000 country schools. As noted earlier, the effects of the Great Depression severely diminished the ability for small communities to provide a consistent education. Sometimes the teacher was paid in eggs or other foodstuffs. In some areas, children under the age of seven were sent home and grade nine was no longer taught. Other times, schools went several terms without a teacher. Premier William Aberhart (also the Minister of Education), declared that centralized schooling would improve education in Alberta. 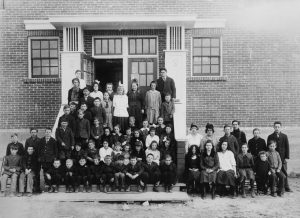 Centralization brought other changes as well. The school bus replaced the horse and buggy and was quite a novelty.

“It was a red school bus- this was before yellow ones came in. It was a cube van with windows and not as big as buses are now.”   Vera Schmaltz

Busing made getting to school much easier and warmer. The boys no longer had to care for the horses at lunch time, thus eliminating the necessity of a barn. However, as a result, the small family atmosphere of the country school disappeared. The children met others from unfamiliar backgrounds. Students came from different origins, sometimes spoke a different language at home, and perhaps had a different religion. While some remember that there were a few fist fights over these differences, most eventually came together to tolerate and respect each other.