Enjoy the video, Beeman & All the Provisions, with a transcription

Around Beiseker, one room schools were used in the eras directly preceding, during, and after the Great Depression. The stock market crash that instigated the Depression was followed by ten years of devastating droughts. In Southern Alberta, dust bowls were severe. The lack of rain, howling winds, and clouds of grasshoppers caused crops to wither, and livestock starved.

Farming communities in Central Alberta were often more fortunate than city dwellers. There were eggs, cream and vegetables to sell. Although parents undoubtedly worried for their family survival, children were often spared the hardship of depression stress and reported being content with what they were provided. 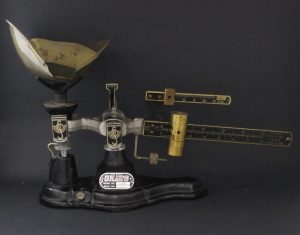 The key to survival was simplicity. Prairie life required nourishing food with no waste. This was a core teaching of early Blackfoot education. As was the crafting of important tools for seasonal survival. Settlers usually purchased durable and warm clothing from the Eaton’s or Sears Roebuck & Co. catalogue, but sometimes also made their own. Clothing that was in good repair was often handed down.

“Our clothes were pretty adequate at the time… we always preferred running barefoot. The hardship we faced when we started school, we had to wear shoes. We hated to put shoes on and that was pretty common for all of us.”

Once home from school, the children changed their clothes to do chores.

“Families all had a few chickens, cows, pigs. We had to milk cows before and after school.”

Lunches were sometimes memorable. At Christmas, a mandarin orange might be included, and the aroma would linger in the pail long after.

“One sandwich I remember- we had sardines- they got pretty high in those lunch buckets by noon.” 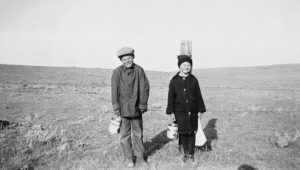 Getting to school on foot and carrying lunch in syrup pails.

A common lunch pail was a Roger’s Golden Syrup tin. The pails had a handle and as Leonard Hagel recalls, one could carry water to dump down gopher holes.

Gophers overran farmland, so the government paid a bounty for gopher tails. In the early 30’s, over two million gophers were killed per year. For many this was an important source of income. During the Second World War, the bounty contributed to the war effort.

“To think our source of money was gophers! They were quite a nuisance. We got a few cents for every gopher tail, the teacher would keep track, and we would buy more war stamps with that money. They were an endless amount of entertainment… kind of tough on the gophers.”

Indigenous Education Before and After Colonization Odessa School 1911- 1918, Winter Fun