Enjoy video, Greenfieled & Other Work To Do, with transcription 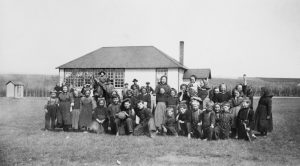 Plans to build Greenfield School began when area settlers met to form a school district in 1912. Two acres of land was acquired for $20.00 per acre. According to Sarah Rau, the school and heating system cost about $1000.00 to build. School started on January 6, 1913. Regardless of age, all students began in grade one to accommodate the various skills acquired through home schooling or previous school experience. A barn was built later in the year. By 1928, the first teacherage was bought for $250.00. This one room schoolhouse generally had 35-40 students, until its closure in 1950.

The daily maintenance of a prairie schoolhouse required a strong back and a high degree of comfort with early mornings. The fires had to be lit to warm the school before the students arrived, water had to be hauled in, and everything always had to be tidy and clean. Sometimes a budget was provided to contract out these duties to a janitor, or to a selected student or two, but oftentimes it was up to the teacher. 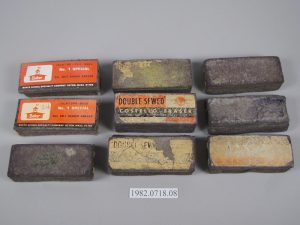 Although hindsight changes perspective, residents of Beiseker report enjoying helping their teachers with chores. They would wipe the chalkboards and run outside to bang the chalkboard brushes together. The wailing prairie winds caused dust to pile on all surfaces, so desks and shelves always required washing. In the winter, the floors were wet from tracked in snow. It was a constant battle to keep the school clean. 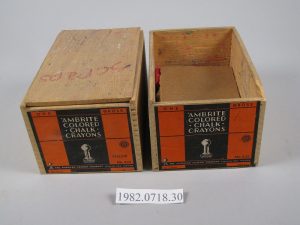 Boxes for chalk used in the classroom.

These chores were done daily, because one never knew when the dreaded school inspector would arrive. Appointed by the Province of Alberta, the inspector made at least one yearly and unscheduled visit to compile their report. The inspector noted the condition of the buildings, how the teacher kept discipline, and their adherence to the prescribed Alberta curricula, all of which the young teacher was responsible for.

“We were all severely terrorized when the inspector knocked on the door and he came unexpectedly, so the teacher was upset, and kids were upset. This teacher stood behind the inspector with chalk in hand and when he asked us questions, she wrote on the board behind him.

One time the inspector noticed all the ink splattered on the wall and underneath the windows, because the teacher would allow the students to shake excess ink off, we were supposed to blot on an inkpad. But they got in habit of shaking it off – the kids got heck and so did the teacher.”

The government inspector had a vast territory and was responsible for about 75 schools. They were expected to encourage and support the teacher, ensure that the buildings met required standards, and confirm the quality of education being taught. Inspectors were also constantly on the hunt for potential teachers among the older children, as rural positions were hard to fill. Depending on disposition, inspectors undertook their duties in more or less gracious ways. The Alberta Teachers Association reports, “Teachers were susceptible to harsh judgements for violating spoken or unspoken expectations.”