Enjoy the video, Shortgrass Prairie Life, with a transcription

The early residents of this land hold a cache of memories of a way of life that has largely disappeared. For many settlers, adapting to a new climate and culture entailed ingenuity and often hardship, but also always a determination to persevere through any challenges. They came to the region with very little in the way of possessions or money and had to build from scratch. The Blackfoot people’s lives changed for very different reasons, and today efforts to preserve those memories hold a special and urgent significance.

“My parents lived in sod houses to start. They moved to Canada in 1907 and built wooden houses. But they lived in the barn first. They had a bunch of kids. I have nine brothers and one sister.”            Matt Schmaltz

There was not a wide variety of food available. The changing seasons brought special once-a-year treats, such as fresh vegetables and fruit. Sugar rationing during the Second World War made sweets a delicacy. 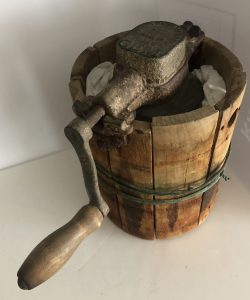 “You ate what was on the table, nothing special. Ice cream was a special thing. A neighbor used to turn ice cream in the dirt basement, I remember going down and turning the ice cream maker.”

Simplicity emphasizes finding joy in daily life and valuing the richness of a shared community.

“People were happy. There was music, dad played the organ, piano, and violin. People came and there was singing.”       Julie Perks

“On Saturday night the guys would go to town, the men would sit inside, and the women would sit outside and wait for them to come out. Because I don’t think they were allowed in at that time.”         Monty Metzger

Community activities usually involved everyone, and due to how small it was, the community had a built-in surveillance system.

“My dad always made sure we got to play hardball and stuff like that. Our (RCMP) policeman was the coach. I would drive to practice in the gravel truck.  I was definitely under-age, but you didn’t fool around, you went straight home.”

“There was a radio, but that was just coming in and we had to have a battery. We were lucky we had electricity.”          Fred Lyczewski 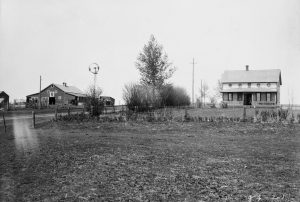 The farm of George Uffleman purchased in 1920.