Enjoy the video, Herbert Spencer & Class is in Session, with a transcription

Herbert Spencer School was built in 1912 and closed in 1953. Spencer was a British intellectual (1820-1903). His broad knowledge on a vast range of subjects attracted the admiration of many academics, such as Charles Darwin. Leah Uffleman wonders if the name selection was aspirational, as the new school trustees sought to provide a well-rounded classical, and very British education. 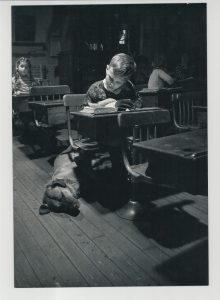 A one room school classroom.

Formal education in country schools extended far beyond the “Three R’s” and highlighted the merits of a strong character and good morals, as prescribed by the Alberta Department of Education curricula.

The United Farmers of Alberta formed the government of Alberta from 1921 to 1935. In 1935, they redrafted the curricula for rural settler serving schools. In order to produce the farmers of tomorrow, education was to be “more grounded in the everyday.” Lessons leaned heavily on stern discipline, underscored by tales of the moral accomplishments of Colonial heroes. The expectation was to achieve a grade six to eight level of reading, writing and arithmetic. It was not common, nor expected, for rural children to continue on to high school.

Additionally, the country schools were more likely to have non-Anglo-Saxon children. All newcomers were required to learn the English language and assimilate to Protestant values.

“I had great admiration for our teachers and rightly so, because they were under a lot of stress. They had never been exposed to the German language. It was a difficult thing for the older siblings who grew up speaking German. By my time, I was pretty bilingual, we got by.”

Tales of those considered the “Other,” that is, those who were not of British heritage, were included in government issued readers. The stories were quaint stereotypes that were not reflective of reality. 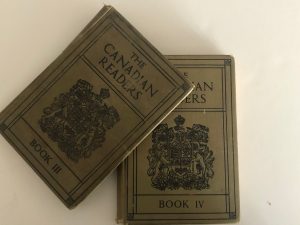 Readers published especially for use in Prairie province schools.

“Children of the Empire, clasp hands across the main,

And glory in your brotherhood again and yet again;

And love the land that bore you, but the Empire best of all.”

Education was based on building a sense of pride and loyalty to Canada with its Colonial heritage and traditions. Students memorized poetry about the ideals of bravery, charity, hard work and self-discipline. Penmanship was considered a valued skill that reflected good character. Many immigrant parents encouraged and supported this education, believing it was in the best interests of their children to acquire the values of Canadian culture. For settler students by and large, this expectation held.

Across the land, complex forces had reduced traditional Blackfoot education in favor of western style schools and training for Indigenous groups. Traditional ways were regarded as a barrier to full assimilation of British culture. Blackfoot children were placed in boarding schools to diminish and counter Indigenous influence. They were not expected to pursue higher education, but to contribute to the agrarian workforce. Blackfoot people today point to this educational practice as exceedingly harmful and the cause of significant community inter-generational damage.

Paddy Springs School 1919-1942, Mischief Indigenous Education Before and After Colonization