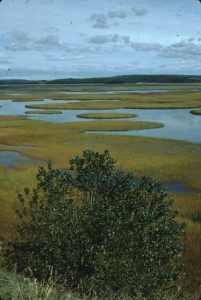 Europeans began to settle in Acadia (as Nova Scotia was then known) early in the 17th century. French-speaking farmers, called Acadians, developed communities on the fertile soil of the Annapolis Valley. Throughout the 17th century, European wars led to French and English confrontations in Nova Scotia, with the province frequently changing hands. The British gained control of mainland Nova Scotia in 1713, and established Halifax as the new capital in 1749.

There are scattered references to early French settlement east of Cole Harbour. Usually a few families were engaged in subsistence farming in combination with fishing, and frequently in association with Mi’kmaq. Around 1688 three French settler and 33 Mi’kmaq families lived in close proximity in the area known as Chezzetcook, a few miles east of Cole Harbour. But permanent settlement was slow to develop. 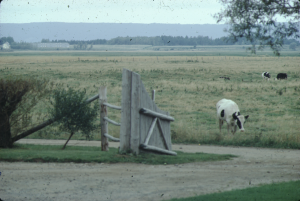 Historically, most Acadians farmed mainly in the Annapolis Valley and around the Minas Basin. Although neutral, they refused to declare loyalty to the British, fearing that they might be expected to fight against their French compatriots. This refusal concerned the British, still engaged in a struggle with the French for control of North America. In 1755, British authorities decided to remove the Acadians from Nova Scotia. Some of those who escaped deportation came to the old French settlement at Chezzetcook, establishing a permanent Acadian settlement there. 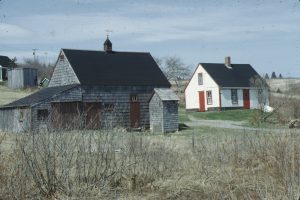 Through the 19th century, the community grew. Acadians from Chezzetcook travelled regularly to Halifax to conduct business and sell their products. Older Cole Harbour residents remembered them singing as they walked through the community with their heavy loads, sometimes pushing a wheelbarrow or pulling sledges, even skating after a winter storm coated the Cole Harbour Road in ice. Always busy, the Chezzetcook women continued their knitting, even as they walked to and from the city. 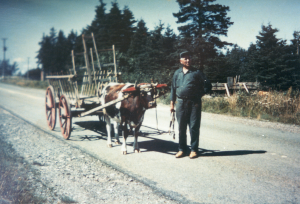 The Acadians made good use both of the salt marshes in their own community, and the Cole Harbour salt marsh. During the late 19th century when the marsh was dyked, some Acadians made hay there, transporting it to their farms after the marsh froze. The people of Chezzetcook continued to use oxen well into the 20th century. Tradition tells of a farmer who took his oxen and sled out on to the marsh to load his hay, only to be caught in a blinding snow squall. Unable to get his bearings, he trusted his oxen. They headed off unconcernedly into the blizzard, bringing their load to exactly the spot where the track led off the marsh towards home.
Bounty Beckons A Diverse Community