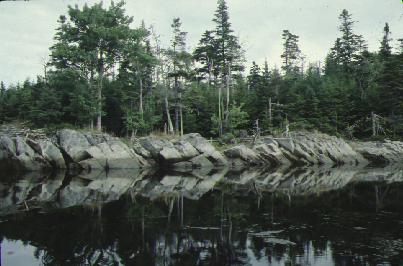 A rock face along the west arm of Upper Cole Harbour. Most likely made of shale, the rocks are at an angle due to tectonic movement. August 1985. Elizabeth Corser collection. CHRHS Archives.

While the Maritime Provinces can generally be said to have had a rather exciting geological past, Cole Harbour is located in one of the least active parts. It sits solidly in what is known as the Meguma Terrane, a continental chunk consisting mostly of shales, that forms the southern half of Nova Scotia. 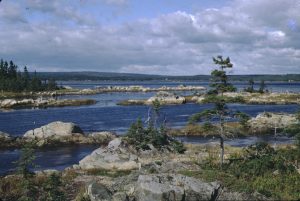 Rocky islands in the estuary, evidence of the Meguma Terrane that makes up this part of Nova Scotia. 1971. Rosemary Eaton fonds. CHRHS Archives.

What is seen in Cole Harbour today is largely the legacy of the last ice age, 10 000 years ago, but it has also been influenced by continental drift, as well as climate and landscape changes that happened during the previous millennia. Evidence of the Meguma Terrane can be seen in ridges of rock around the harbour, especially in the barrens above it, and in the rocky islands scattered around parts of the estuary itself. 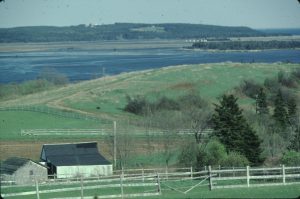 A drumlin on the west side of the harbour, facing Lawrencetown and Glasgow Island. May 1981. Elizabeth Corser Collection. CHRHS Archives.

The soil around Cole Harbour is scarce, poor, and acidic. However, as the last ice age ended, the glacial ice left one of its most characteristic features behind – drumlins. These whale-shaped deposits of glacial till can be found all around the estuary. On the western side, low, rounded drumlin hills provided well drained farmland. Early settlers recognized the potential of these hills, and they contributed to two centuries (roughly 1760 to 1960) of agricultural success in Cole Harbour.

Drumlins along the shores outside the salt marsh continue to erode and provide material for Cole Harbour Beach (Rainbow Haven), as well as other local beaches and sand dunes. Some of the sediment is carried into the salt marsh on the rising tides, while soils from the upland drumlins are carried down into the estuary by rivers and streams. These build up as deposits on the bottom of the estuary together with generations of decomposing vegetable and animal matter and this, with the twice daily flooding by the sea, builds the salt marsh. Cole Harbour salt marsh is slowly, but continuously, building, as it has been doing over the millennia. 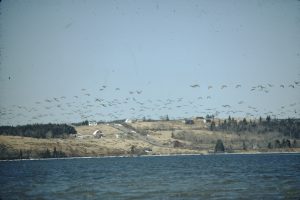 Looking out across Cole Harbour today one sees an expanse of water not unlike what the Mi’kmaq and earliest settlers saw. The Mi’kmaq called it Wampawk, meaning “still or peaceful waters.” More than half the lands seen around the harbour itself remain undeveloped. Resident and migrating waterfowl still find its stretches of open water, marsh grass and mudflats where they can safely land to rest and feed. A handful of hunters come in season, mainly for the geese, but this traditional use has little impact on the flocks.  A few visitors still fish or dig for clams recreationally but there are no more commercial fisheries in the harbour. Most people come for the wholesome outdoor exercise and to watch, enjoy and photograph the scenery and wildlife, appreciating the opportunity to find such “wildness” so close to the city