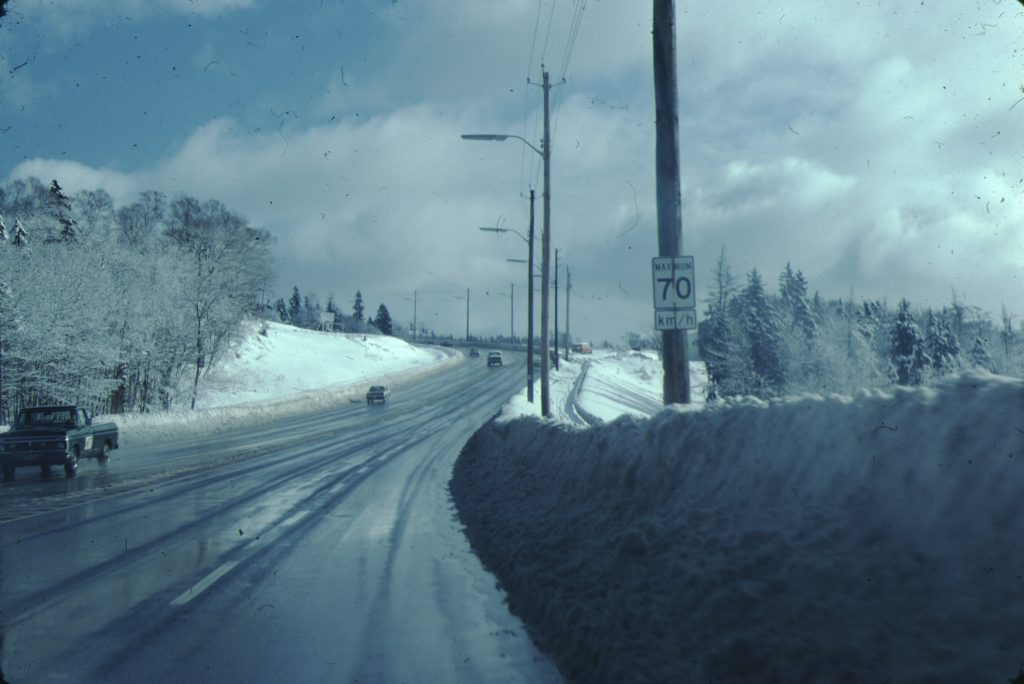 Breakheart Hill, now levelled slightly by the building of Portland Street, is still steep, as seen in the photo from 1981. Rosemary Eaton fonds. CHRHS Archives.

The landscape of mixed farms and market gardens along the Cole Harbour Road became more developed and prosperous as the 19th century progressed. The condition of the road slowly improved, thanks to government contracts for road works that usually resulted from citizens’ petitions. Many farmers travelling to Halifax now used horse-drawn express wagons built in the community and adapted to suit local needs. The big hills still presented a challenge, especially the one known as Breakheart Hill. Some farmers would leave an extra horse at a farm near the bottom of the hill while they attended to their business in Halifax. On the way home, they hitched it to their load to provide the extra help needed to get up the hill. Others unloaded half their load at the bottom of the hill and made two trips. Going down was equally challenging as horses had to hold back their heavy loads.  There are accounts of accidents where the harness gave way allowing the load to run into the horse. 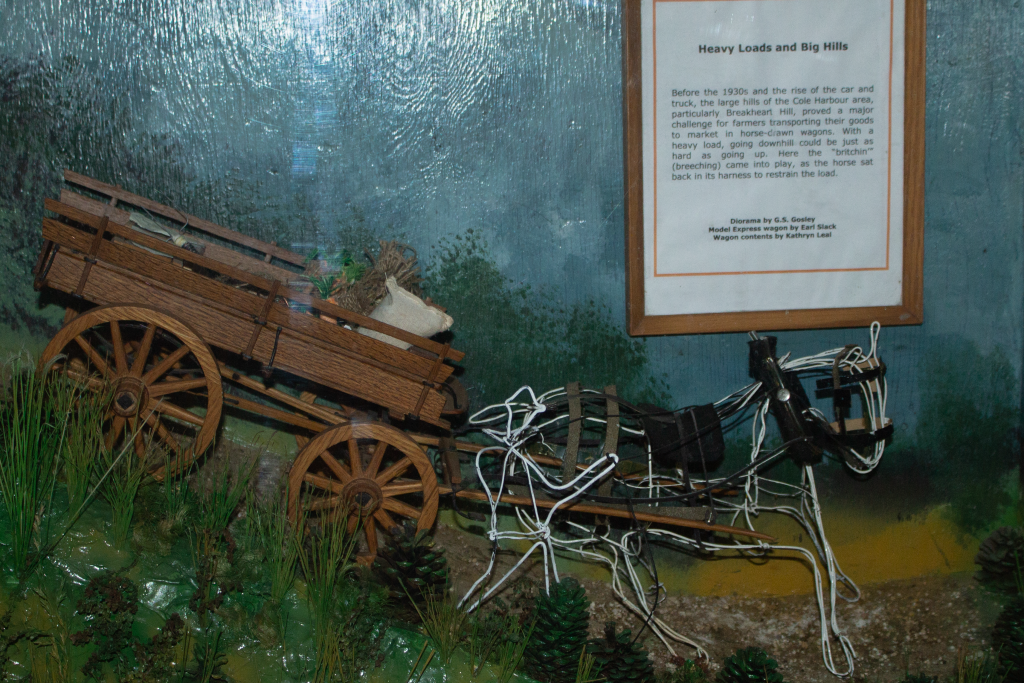 Going down a hill like Breakheart required a horse to sit back in its harness, restraining to load it was pulling. This was called “britchin'” or “breeching.” The model in this photo can be found on display at the Cole Harbour Heritage Farm, and was created by G. S. Gosling, Earl Slack, and Kathryn Leal.

Delivery wagons and other conveyances in Halifax required a great many horses which were housed  in the city. The large quantities of manure they produced had to be removed, a boon to farmers who needed it for their land but a heavy load for horses climbing Breakheart Hill. The saying that pulling a load up the hill was enough to break the heart of a horse, resulting in its name. Not until the 20th century was the steepness of the hill reduced by a combination of rerouting, cutting down and filling in the road. Travellers using the dyke bridge across Cole Harbour avoided Breakheart Hill by coming to Dartmouth through Eastern Passage, a route that cut out the hills.  Others coming from the east took the Old Lawrencetown Road, which branched off towards the northeast at Little Salmon River and came into Dartmouth by way of what is now Main Street. Only a few traces of this road remain. 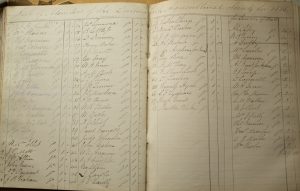 Farming, and occupations associated with farming, dominated the community of Cole Harbour. Most farmers were members of the Dartmouth Agricultural Society, and entered produce in its annual exhibitions and participated in local ploughing matches. Well-bred stallions and bulls were purchased to upgrade their livestock. Local dairymen delivered daily to customers in Halifax and Dartmouth.

On the eastern side of the Cole Harbour marsh, farming was a more marginal livelihood, reflecting the difference in the terrain and the lack of arable soil. People tended to stick to older farming ways, as improvements in agriculture were slower to come, and fishing, lumbering, and mining were more important to most local residents.

Fishing for eels has been one of the activities common in Cole Harbour for many years, as can be seen in this silent undated video from the CHRHS Archives.

And in between was the marsh land: a tantalizing expanse of rich, unused land apparently just waiting to be exploited. The aboiteau gates were still in place, although they suffered severe damage each spring when the ice moved out of the harbour. With the dyke company no longer keeping up with repairs, it would not be long before the sea reclaimed the gates for good.