Fundraising for women’s health and research was an early challenge for Women’s College Hospital (WCH).

As Canada’s first women’s hospital run by women doctors, WCH often encountered gender discrimination and unfair bias. This means that the womens’ skills and abilities as doctors were often unfairly pre-judged because they were women.

But as WCH evolved into a modern hospital in the 1920s, it earned the city’s trust – especially among women. The hospital relied on the support of local government, residents of Toronto, and women’s groups to help fund its expansion and equipment. Yet funding for medical research continued to be a challenge.

In Canada, early medical research was funded by the provincial governments. Universities, private individuals, and foundations also contributed. It was not until 1938 that the National Research Council began funding medical research on a national scale.

Secondly, studies have shown that research projects submitted by women are less likely to be funded than those submitted by men. This is referred to as a gender gap in research. A study published in 2019 by the Canadian Institutes of Health Research found this still happens today.

In the 1940s, WCH received funding from the Ontario Cancer Treatment and Research Foundation. It helped to support WCH’s Cancer Detection Clinic. It also laid the groundwork for women’s cancers research. But if WCH was to continue to grow its research program, it needed more funding.

The solution came from the generosity of Canadian philanthropist Charles Luther Burton. In December 1955, Burton established the Dorothy Frances Graham Research Fellowship Fund. It was named in honour of his daughter, President of the WCH Board of Directors. The annual proceeds from the fund were used for research fellowships for women. It also funded research projects in the hospital. For the first time, WCH could set and fund its own research priorities. 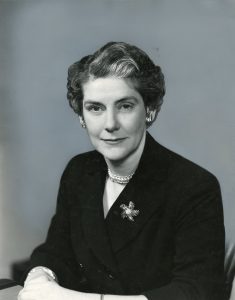