Preparation for the fall fair must have started the winter before, for how else could so much ready for sale right after the busy summer and fall season? When you went into the hall, there would be aprons and mitts, strung from lines across the hall and underneath that, tables of food prepared by the women in the community. Bottles of jam, fresh made bread and pies, cakes and cookies waited for the sale to begin. 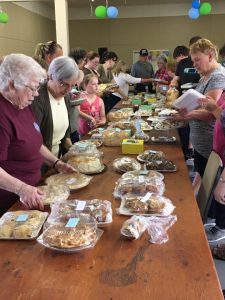 In Monkstown, the ladies set up the sale goods, and then everyone tried to position themselves where the items they wanted were placed. There was a little good natured jostling as people tried to place themselves near Aunt Eva’s tarts or Aunt Rita’s crocheting. The countdown began and within minutes the tables were cleared and every item was sold.

Usually a soup supper or sweet tea followed and the proceeds then went to help the missions. Though it seems now we were poor, this could not have been so for as Ray Guy says “people would have been running off Soup Suppers to send parcels over to us”. 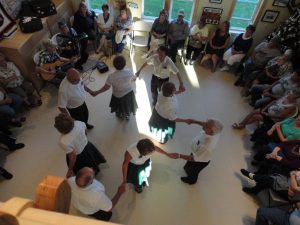 In Rushoon, the fall fair was a full day affair, much like Lady Day, with the addition of the afternoon sale of goods. If anything was left after the sale, it went on tickets or became a prize for the parcel post Bingo. Suppers were local fare, moose soup, partridgeberry pies, blueberry grunt with cream, and occasionally there would be homemade ice cream for sale. After all the day’s events, dancing would begin around 8 and frequently continued til daylight. There was no band, just a single accordion and people danced to sets, such as the lancers or the Virginia Reel and the occasional 2 step waltz.

Listen to Mary Power and Mrs. Anne Whiffen with transcription 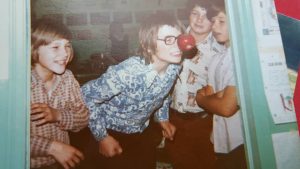 Though the fall fair was often held close to Thanksgiving, it was not a Thanksgiving time, as this holiday had not yet made it to the Newfoundland calendar. The closest equivalent to a harvest supper and dance would have been the Colcannon supper.  This meal was a stew or hash made with carrot, turnip, cabbage, potatoes and a little salt meat for taste.  There were no Halloween costumes worn to this time and the only nod to Hallowe’en would be the snap apple games at the school  in the early evening to keep the children amused.