When I visited with Alice Drake, I asked her about her memories of  Christmas preparations. Like many others she spoke of how the Christmas tree was not put up until Christmas Eve and even then all the children would be in bed before it was put up and decorated. She recalled how there was no Christmas tree at all when she was a small child and how she came to have her very first Christmas tree:

Our guests also spoke of the simple gifts they received on Christmas morning. The first gift Jane Hayse of Parker’s Cove could remember getting was a wind up rubber duck, and Florence Miller still has the wind up hockey player she received more than 75 years ago. 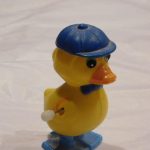 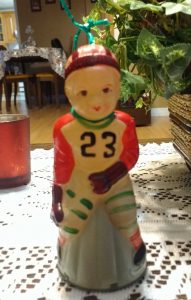 Earl Lockyer of Boat Harbour, remembers getting an axe one year.  He said “I knew what I was going at after Christmas” and started to laugh.  “Very very few toys when I was growing up” says Earl’s brother Joe.  “Can’t remember very much, scribbler, exercise, something you were going to use. ”

Listen to the Lockyers’ story with transcription

Marion Barnes spoke of how Sears or Eaton’s had more power than Santa in deciding what your gift might be.  When the Christmas catalogue came out, there would be so much excitement over the beautiful gifts shown there. No letters were written to Santa but there was much doubling down of pages and circling pictures in the “Wish Book”. Late at night when the children were all in bed, mothers wrote letters to Mr. Eaton, and in later years to Sears and Co, to try a fulfill their children’s wishes. But the power of the company to substitute when the ordered item was unavailable, led to some interesting results…

Listen to Marion’s story with transcription

Determined to get there Anticipation and Appreciation– The Christmas Barrel