Food for the wedding was whatever the community and the couple’s family could provide as well as the season of the year. The wedding tea might range from soup and bread with partridgeberry jam to a full garden party type supper. Cakes were made and donated by the women in the community. Grace Lockyer recalls how they would collect them in a suitcase and bring them to the hall. She tells of how one was kicked across the harbour ice in a tin can and still ended up being fit for the table. Those cakes were not the delicate cake mix stuff, but sturdier versions with lots of dried fruit.

Listen to Grace Lockyer with transcription 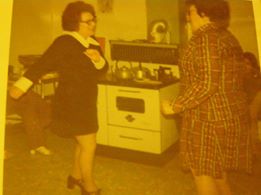 Two women dance a step dance at a kitchen party

Sometimes the wedding supper would be held in the bride’s house. As Johnny Pearson recalls  “Wedding suppers in Merasheen were held in the bride’s home, no room in the house was off limits”.   Mr. Pearson says the gathering might have started in the parlour but “before it was over a bunch of people might have ended up in one of the bedrooms sitting around on the bed singing an old song or telling an old story.” 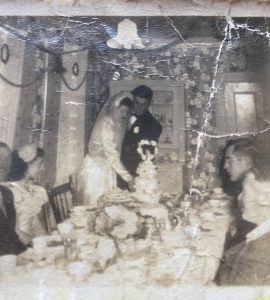 The day of the wedding always started with church and the firing of guns as the bride and groom left the ceremony. Then the bridesmaids and brides boys would go door to door to invite people to the wedding. The bridal party ate at the first table and only family and very close friends joined the wedding party at this table. The best of the food was served at this table but all through the night there were other settings, and the guests came and went as they chose, between the dances.

Listen to Ruby King with transcription 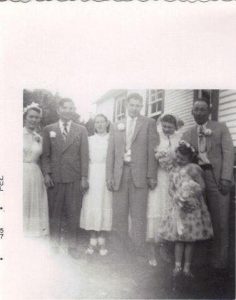 Ruby and Tom King with their bridal party

Though there were no bands the dance would last til all hours of the night. And once again, the children strolled home with their parents at daylight, having slept out the night  to the sound of accordion music and the hush, hush sound of the women’s dancing shoes.