In Newfoundland and Labrador, August 15, the feast of the Assumption, is better known as Lady Day.  Lady Day, especially in Placentia Bay, was a day of celebration that started just after noon and finished with a dance that went on well into the next morning.

In Rushoon, supper on Lady Day, being Garden Party Day, would be special. Cakes would be set out on the tables in the hall, partially cut, and left there until there was nothing but crumbs left. Then, like magic, new ones appeared to replace the empty plate. These cakes were not the usual raisin or fruit cakes, but iced cakes–chocolate, lemon and vanilla — covered in “hundreds and thousands”, colourful and mouth watering.  Some ladies were well known for their baking abilities and you’d try to time your “sitting in” by whose cakes were on the table.

Once you paid the ladies waiting on the tables, you were allowed to sit in and eat. They brought tea and a cold plate for which the ladies had made cold potato salads, cole slaw, bottled beets and mustard pickles. There’d be jelly and custard, trifle or blanc mange and of course, as Maureen Whyte describes it, there’d be “garden party meat”. This was some type of  luncheon meat that came in a large square can. It would be brought to the community by the priest and sliced and served only at the garden party.  But the main attraction, especially for those of us at the “children’s table”, would be the cakes and the opportunity to have more than our usual share. 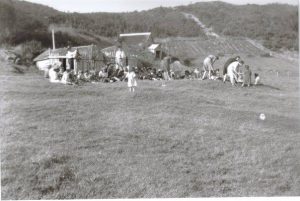 Families at a garden party

In the afternoon, there were ticket wheels and other games of chance that demanded our money. With toys more beautiful than even the best of our Christmas presents, it was hard to try and hold onto enough money to pay for our garden party tea and the parcel post Bingo. For a few pennies, you were given a single card, good only for one game. The winner got a wrapped mystery prize that might be a box of Rinso or a beautiful set of pillow cases, depending on the means and the talent of the donor.

With cash so scarce in those days, it’s no wonder we had to save up all year for the garden party.

The 24th of May The Fall Fair