Imagine answering your door to find five masked people speaking with disguised voices asking to be allowed in. Would you let them in? In Newfoundland, at Christmas, it would have  been expected. 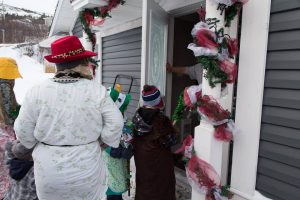 Mummers knocking and asking if they can come in

For these are the Newfoundland mummers– the highlight of the Christmas celebration. No matter what your age, you could  go mummering. Everyone would be disguised in all kinds of outfits, covering their faces with lace curtains or pillowcases. They’d disguise their voices, too and after knocking loudly, at every house they’d ask “Any mummers ‘lowed in?” 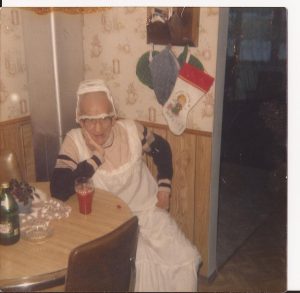 If the answer was yes, they would go inside and the usual routine would begin as the homeowners tried to guess who each one was. “Are ye from across the bay?” “No Sin John’s” ” Ye’re just tryin’ to fool us”  “I think you’re Bill, from down in the cove and that one’s Sadie cause she got on her mother’s apron”. 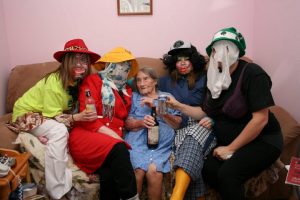 Mummers having a nip in Parker’s Cove

And so it continued til they were all discovered and the face covering was removed. Mummers would then be offered a snack, usually fruit cake and Purity syrup, but sometimes the adults would be treated with a drink of rum.

Listen to Frank Murphy on mummering with transcription 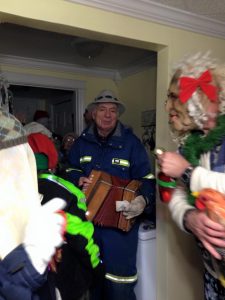 Gerald Murphy playing the accordion for mummers in Parker’s Cove

Then there’d be dancing, usually to accordion music or mouth organ but quite often it would be just chin music. As youngsters, we liked the chin music best because each of the women who sang for us had their own collection of nonsense syllables in their song. Some even made it up with real words “as carn as she goes” (according as she goes).  Listen as Earl Lockyer describes an example of a verse made up on the spot for the mummers to dance to.

Listen to Earl Lockyer with transcription

Mrs. Anne Whiffen was one of the best for the chin music and youngsters would go to her house night after night. She says her husband really loved the mummers but he’d always say “the canvas will be worn out before Christmas is over”.

View the video of Mrs. Whiffen with transcription