While Mother’s Day is a relatively new time to celebrate in most communities of Placentia West, it was a very important day in Monkstown going back to the 60s and 70s. Sunday school celebrations on that day were all about the Mother’s day pageant. For weeks beforehand, the youth leaders practiced with the younger children for their parts in the pageant.  At the end of the pageant the children would bring their mothers paper flowers and cards they had created for them.

In the Catholic communities, no such event was held but May was the month to honor Mary, the mother of Christ with May altars and evening rosary. It was spring time and young people wanted to be out and about, but they had to participate in the family rosary first. So they would often rush through their “Hail Marys” at home, only to run to their friend’s house and have to kneel for a second rosary, because that family hadn’t finished yet. This religious focus left an opening in the calendar for what has become a “grand time”. 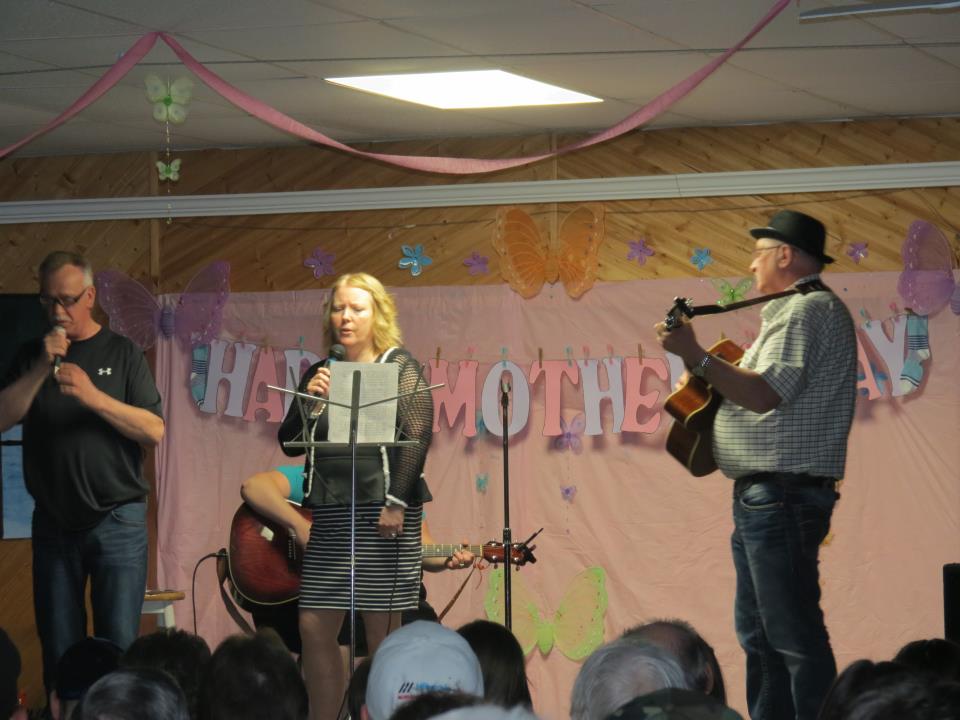 In January 1980, a fire in Parker’s Cove destroyed the home of local musician, Ambrose Hickey and he was seriously injured.  In May, he was finally well enough to return home, but he had no home to go to. As fundraising was planned, talk came round to the Monkstown tradition of celebrating Mother’s day with a pageant, and the Parker’s Cove Mother’s Day concert was born. For almost forty years since then, the community has celebrated this day with a concert, dance and sometimes a dinner. And Ambrose Hickey has given back to his community, by participating in almost every one. 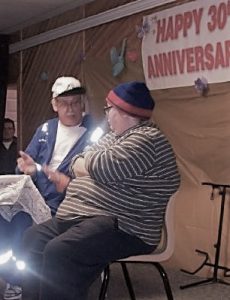 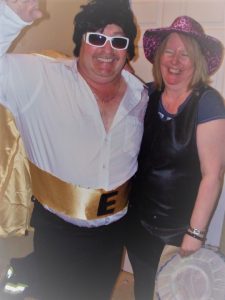 Albert Murphy and Doreen Hayse await their turn on stage

From the beginning, Doreen Hayse took on the main role in organizing the concert, writing the skits, playing guitar and keeping the performers on task. Comedy is the order of the day and local issues and activities become the inspiration for skits and recitations.“When Aunt Suse got Facebook” and “On the Turnaround” are just two of the comedic skits that poke fun at how our lives are changing in this small community. 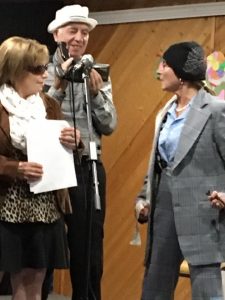 A woman impersonating a man while being interviewed by another woman 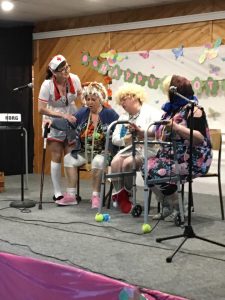 Listen to Doreen Hayse with transcription

Mother’s Day has become the time of the year as many who have moved away come home to see the concert and some travel long distances to participate in it. There are no paper flowers for the mothers at this concert, though that tradition continues as high school graduates present their mothers with flowers at the school graduation celebration. But there is no mistaking it, this concert is for mothers.

Listen to the Mother’s Day Concert video with transcription

Paddy’s Day The 24th of May