Having survived the Great Depression, Arnprior’s “Kenwood Town” was ready to face the onset of World War II. Kenwood continued to produce essential goods for the war effort and its employees were keen to serve their country.

Many employees, some fresh out of high school, enlisted. In total, 57 people volunteered for service.

Three of those who enlisted did not return. John Yade (19) became Arnprior’s first casualty when the ship he was serving on was torpedoed on February 4, 1941. Keith Dupuis (21), who listed his occupation as “spinner”, died in a motorcycle accident while on duty in 1944 and Nelson Hogan (23), who had already survived a tour in the Pacific Theatre, was killed in action while in France. 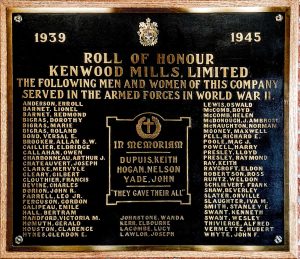 Kenwood Mills limited their production of blankets for the civilian population due to wool shortages. At the same time they ramped up production of paper-makers’ felt to meet the demand for newsprint being fuelled by consumers wanting paper products like newspapers containing daily reports of the war, government document enlistment and discharge papers and an increased demand for Government paperwork and records. The Canadian bureaucratic machine thrived in print.

By October 1939, Kenwood was producing blankets for the Canadian Navy and, throughout the war, continued to produce textiles like “Fearnought”, a thick woolen material used for overcoats. The mill in Rensselaer, New York, a leader in innovation for mill technology, continued to supply the Arnprior mill with the most up-to-date technical plans to keep their Arnprior plant in top shape. 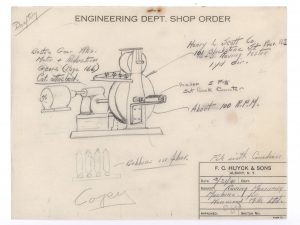 The Mill that Saved the Town Arnprior: “A Great Place to Live”