Francis Conkling Huyck started his career in paper-maker’s felt production at Rensselaerville, New York in 1870. By 1879 he had moved his operations to Kenwood, New York. Following an 1894 fire which destroyed the mill, he returned to Rensselaerville with his sons, John, Edmund, and Francis (Frank) Jr., and restarted the business with a new name, F.C. Huyck and Sons, branding his felts under the name “Kenwood.” 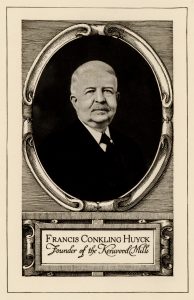 Following F.C.’s death in 1907, F.C. Huyck and Sons remained under the ownership of his three sons.  Due to the then burgeoning American newspaper business and over-consumption of American softwood timber, many paper producers moved north. 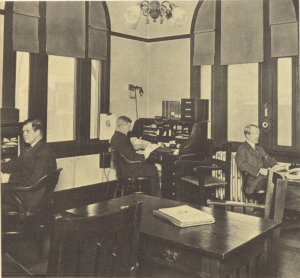 The Huycks were looking for an opportunity to expand their business and saw that opening a location in Canada might be a positive move. A booming paper industry in Canada meant that felts were needed for production. When they found the Griffith-McNaughton Ltd. mill in Arnprior was for sale, they purchased it and made their way into the Canadian market. 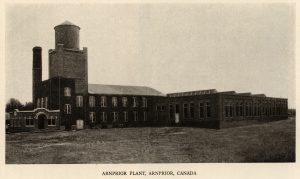 With the purchase of the mill, the company gained access to fresh water from the Ottawa and Madawaska Rivers, essential in the production process of felts. There was additional incentive as the mill was situated less than a kilometer from the Canadian National and Canadian Pacific railways, ideal for the transport of raw and finished goods which included the fulfillment of the existing contracts with the Department of Militia and Defence and the War Department.

A staff of about 60 was maintained after the purchase, a number which increased within 6 months. 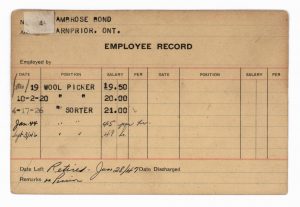 Employment record of Ambrose Bond who started in 1919

James Griffith and Norman L. McNaughton The Mill that Saved the Town