Since its inception, the “Huyck” brand name was synonymous across the globe for quality in the world of paper-making felts. In 1962, Arnprior’s Kenwood Mills and the Formex Company of Canada (another subsidiary of the Huyck Corporation) from Kentville, Nova Scotia, came under the name Huyck Canada Limited. The name change would make certain there was no mistaking the quality of product coming from the Canadian facilities. The divisions were amalgamated in 1967, with the headquarters located in Arnprior. 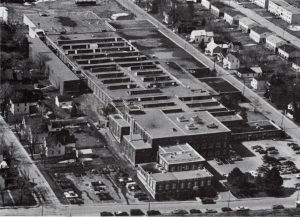 Very little changed due to the switch. Paper-makers’ felts remained the number one production item, and blankets continued to be popular. Starting in the 1960s, synthetic fibres were used more widely in the factory. Paper-makers’ felts became a wool-synthetic blend, before transitioning to a 100% synthetic fabric. Other innovations occurred in the felt department with the mill installing a massive needle loom to create their POROSOFT felts. Needle looms used needles to move the weft thread instead of shuttles. The process resulted in felts that retained less moisture and were more efficient than their predecessors.

A similar switch-over occurred within the blanket department. This resulted in there being all-wool blankets and ‘textile’ blankets (a combination of wool and synthetic material). These popular furnishings were still meticulously packaged in bright, geometric-patterned boxes. The quality stayed the same, with just a slight change in name. 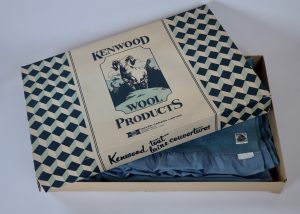 Unfortunately, by 1979, it was no longer cost effective for the Arnprior plant to produce the well-loved blankets. Production stopped, workers were laid-off, and the mill turned all of its attentions towards the felts.

Nonetheless, most employees believed Huyck was a fair employer. Hard work was generally rewarded with a long, happy career. With almost 400 people on the payroll in the late 1960s, the mill was the largest employer in Arnprior, employing 7% of the population. A popular place to work, entire households were often employed and treated as more than a number, while feeling safe in the workplace. 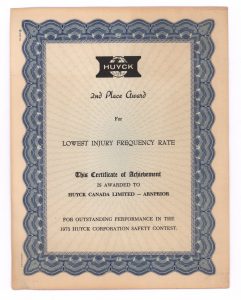 Although the basic starting wage was low, young, untrained women could come, and get a steady job with holidays and benefits, that would include external training when required. Job possibilities had varied since the 1940s: aside from the blanket and weaving departments, women could also find employment in the front offices, in accounting or as purchasing administrators, or operating the switchboards within the plant.

Bonuses were given to employees along with company-branded merchandise. Quarter Century Club Dinners were held along with holiday potlucks, all in an effort to show Huyck’s appreciation. No expense was spared to ensure that the Huyck workers understood that they were more than just a number. 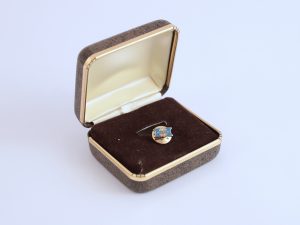 More than Blankets and Felts An International Takeover