In 1996, Weavexx’ Arnprior plant stopped production. This ended the 80-year legacy of textile production in the William Street factory. This also ended almost 130 years of textile manufacturing in Arnprior. Of the 68 employees, 48 were laid off. The remaining 20 worked in the front offices, operating the finance, customer service, and marketing departments. The entirety of Weavexx’ felt production was moved to their plant in Warwick, Quebec in order to increase efficiency and meet customers’ needs. The front offices finally closed their doors in 2002. 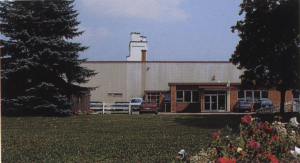 The closure meant there were almost 50 unemployed men and women, many who had worked at the mill for over 20 years. In looking for jobs they were entering a competitive workforce – no longer was it standard for companies to hire an applicant on the word of an acquaintance. As a minimum requirement, other employers expected a Grade 12 diploma. Many struggled to find full-time, well-paid positions like those available at Weavexx before it closed its doors.  The era of contingent work had arrived in Arnprior.

Concern surrounded the fate of the building, with only the very front being occupied. In 1997, the building was purchased by Sullivan Realty Leasing Corporation. The 225,000 square foot structure would become a corporate centre and storage facility, which is the capacity in which it survives in today.

An International Takeover The Heartbeat of a Rural Community