Kenwood Mills was well enough established by 1929 that the economic crash, which started the Great Depression, did not close them down. Kenwood was able to make it through the most difficult months and, by December of 1929, their profits were increasing.

Even by 1933, Kenwood Mills was a diverse place to work. Men were employed to do the more physical aspects of the job, but women worked in administration, the weaving and joining rooms and in the final inspection of products. This led to the staff being around 30% female.

Other employers in Arnprior were not so fortunate. The McLachlin family’s lumbering operation, started in 1853, was already in decline by the 1920s. Although they continued to hire people while the lumber market was in decline, many employees started to leave and headed to Kenwood Mills, citing that they were not getting ‘steady work’. Before the market crashed in 1929, McLachlin Bros. shut down their sawmills, putting hundreds of men out of work.

Kenwood Mills was credited as the employer that saved the town from becoming poverty-stricken. Although the mill didn’t appear to hire on a significant amount of those laid off from McLachlin Bros., or other local businesses, they were certainly able to provide a steady, dependable source of income for the 165 people who were employed there (Arnprior Chronicle, December 13, 1929). 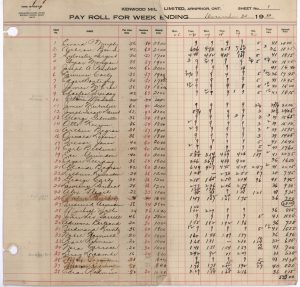 They hired local contractors (including M. Sullivan and Sons), throughout the 10 years of economic hardships, to renovate and enlarge their building. In 1929 alone, the size of the factory was expanded to 110,000 feet. The construction work provided jobs, mostly casual, but sufficient enough for employees to put food on their families’ tables.